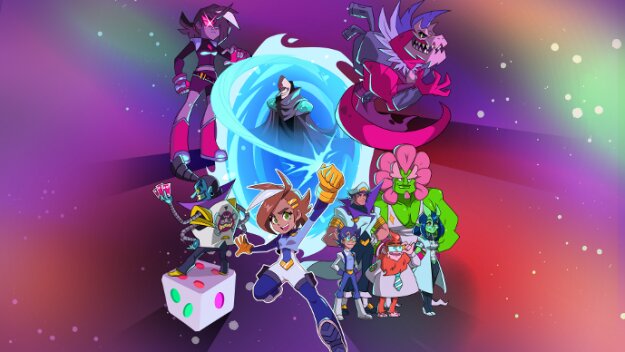 13AM Games’ last title, Runbow, found success on Wii U with its unique style and fast-paced platforming. Its new game, Double Cross, moves away from the multiplayer structure, instead opting for a story focused, single-player action platformer in the style of the Mega Man series.

Double Cross doesn’t focus solely on the platforming, though, and that’s to its detriment. Fast-paced, physics-based action is split up by a muddled story and bland investigation, never doubling down on what it actually does well.

You play as Zahra, a new agent of R.I.F.T. (Regulators of Interdimensional Frontiers and Technology), who takes charge of an effort to find out who was responsible for an attack on their base.

You undertake missions in any order, in three different locations. One is a decaying desert factory-like setting, and another is a goo-filled swamp location.

The variety in setting is great, especially since much of the gameplay in each location differs too, with much of it being influenced by the theme of each place.

Most of it is based around Zahra’s signature move, though. She’s given a grappling hook of sorts that flings her between items in the worlds, opening up the potential for experimentation in combat and excitement in the platforming.

You’ll be launching Zahra between grappling points to traverse the world, or you can use it for grabbing items to throw at bad guys. It takes a lot of getting used to, though.

You get used to it after a few levels, but it can feel awkward due to how floaty Zahra is when she jumps. It’s difficult to gauge where she’s going to land at times, making the precise platforming tough. 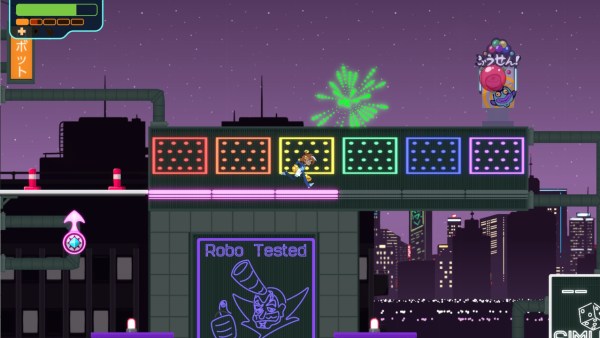 Double Cross also struggles at pace too, which is surprising since that was Runbow’s main selling point. Zahra is often unresponsive. It feels as if she needs to get her feet firmly on the ground before jumping again.

She often won’t jump at all when you’re trying to move quickly, seeing you fail over and over again. The mix between finicky grappling mechanics, floaty jumping, and unresponsiveness makes the action frustrating at times.

The level design is good enough at points to counter the frustration, and running through the levels can be fun when the action flows seamlessly. It simply doesn’t happen frequently enough.

There are also combat sections scattered throughout the levels, and it’s all pretty generic stuff.

There are basic enemies that pose almost no threat, enemies that throw items that can be grabbed and thrown back with Zahra’s grappling hook, and beefier enemies that you need to roll out of the way of.

The larger enemies are a welcome challenge, with you needing to consider your approach depending on their attack style and watch for their advances. The boss fights towards the end of the game are well-designed too, if a little too easy.

Most of the combat sections see you face just three or four of the fodder enemies and you do nothing more than stand next to them hitting Y until their health bars deplete. It’s just dull, and another way that Double Cross avoids focusing on the actually enjoyable platforming moments.

The intergalactic story plays a significant role, too. The world 13 AM has created is vibrant and engaging. Between missions, you’ll be running around the R.I.F.T base, talking to the weird and wonderful agents on board.

The Saturday morning cartoon-style world and silly jokes are aimed at younger gamers, but so much jargon and world building is thrown at you at the beginning that it’s easy to get lost.

There are more than ten characters, McGuffin aplenty, and far away worlds that you’re expected to learn about from a few long conversations that begin the game.

Take your time to take it all in and the story’s fun and full of unexpected twists, just be aware that there’s a lot of reading to be done in Double Cross, and if you don’t learn the names and places, you’ll soon be very confused. 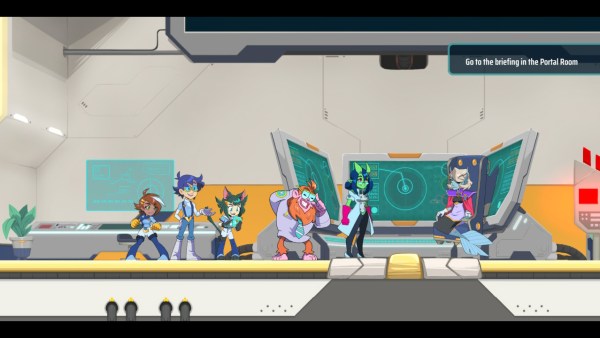 What feels most out of place in Double Cross, however, is the investigation. It’s under-baked and feels entirely shoehorned in. As you talk to the other agents and complete missions, Zahra’s Case Log will be updated and you’ll be given some important items.

By wandering around the R.I.F.T base, talking to colleagues and showing them things, you learn more about the world and are able to open up cases that lead to the game’s final few levels. It’s relegated to little more than a way to slow down the progress between missions, though.

There are only 12 base levels in total, only a few of which last longer than 20 minutes, and the investigations are there to make it seem like you have more of a role in where the story is going.

Instead, I found myself simply going up to every character in the base and showing them every item I had until someone spoke to me about one and gave me the next piece of information for the log.

It’s tedious work and, once again, is just padding that distracts from what Double Cross actually does well.

With the dull combat, front-heavy story, and basic detective moments taking up a large proportion of what is already a short game, Double Cross is boring or frustrating far more often than it is fun.

Even though the platforming gameplay takes some getting used to, and it can stutter when precision or quick movements are required, the level design and idea variety are good enough that there’s some traditional platforming fun to be had, especially in the latter levels.

Runbow proved that 13 AM Games knows what it’s doing when it comes to platforming, and there’s glimpses of that here that show that Double Cross could be so much better with some refining.

As it is, though, there’s too much in Double Cross that either bores or frustrates for the quality moments to be worth struggling towards.