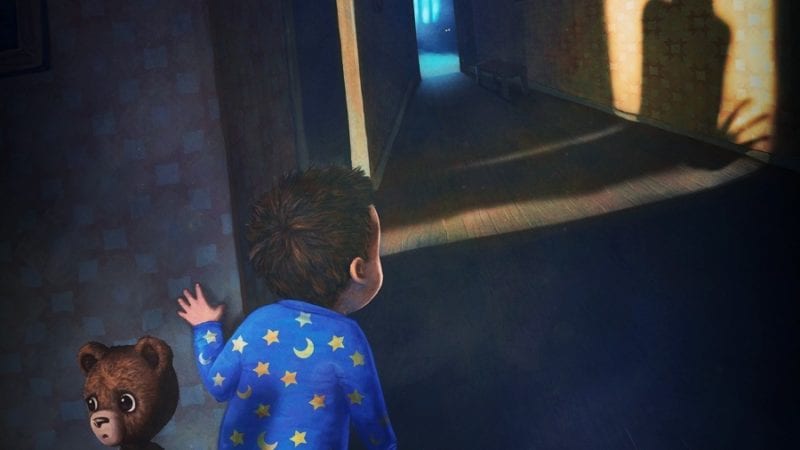 While some gamers consider Nintendo consoles to be for children, the company has made great strides to separate itself from that image. To be more specific, it’s made baby steps, pun intended, but it is still changing gamers’ minds with titles aimed at older audiences, even if those titles star children.

Among the Sleep is the latest in a long line of older, well-received titles making their way onto the Nintendo Switch. While the original game was developed and published by Krillbite Studio, the Switch port will be brought to us by SOEDESCO.

Unlike other horror games, players in Among the Sleep don’t explore puzzle-filled mansions and either fight off or escape horrific monsters. Instead, the game takes place from the perspective of a scared toddler who searches for his mother with the help of a talking teddy bear. Imagine if the Nickelodeon cartoon Rugrats featured a horror-themed episode with actual, bonafide scares, and you would get a good idea of what Among the Sleep is going for.

While Among the Sleep released back in 2014, Krillbite Studio published an Enhanced Edition in 2017, complete with new dialogue and improved visuals. Switch owners will receive this version for the definitive experience. More importantly, gamers can buy either a digital or a physical version, which is always a good thing.

Apparently, the Switch release was a long time coming, as well as a popular fan request. According to the CEO of Krillbite Studio, Jon Cato Lorentzen, “Ever since the Nintendo Switch was announced we’ve had fans contacting us requesting a port of the game for the Switch. After recently releasing the Enhanced Edition we thought the time was right, and SOEDESCO Studios has been the perfect partner to work with for the port.”

While SOEDESCO has not revealed a release date for the Switch port of Among the Sleep, gamers who missed out on the original shouldn’t pass up this version up, especially since the Switch essentially make the scares portable.