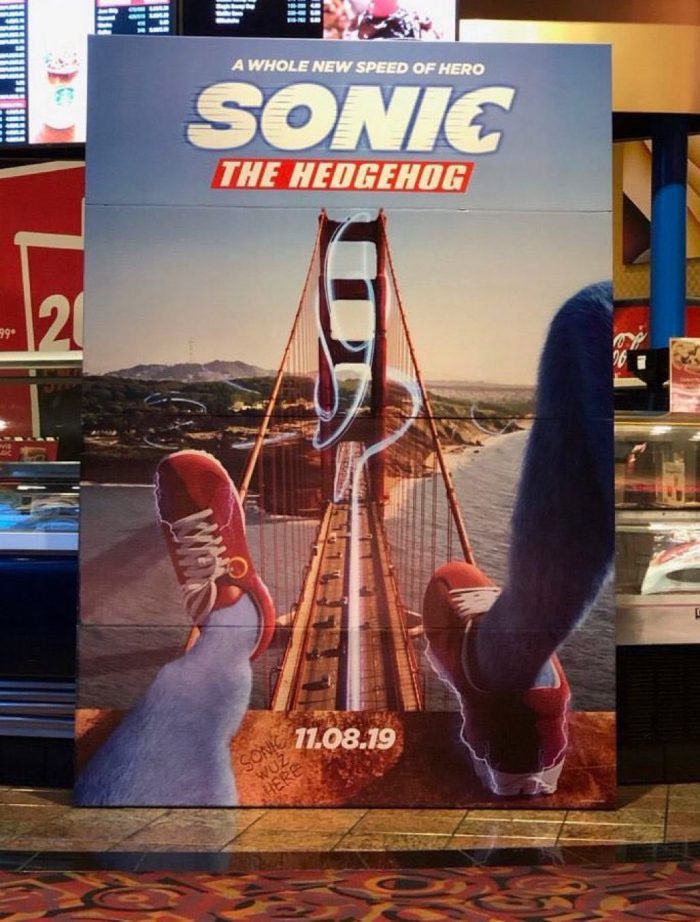 The first teaser poster for the Sonic movie lit the internet on fire with all the talk of the character’s controversial live action look. Now it seems the internet will have a new poster to gawk over.

The poster was first discovered by a Twitter user, LightsCameraPod, however, there was still some question as to the legitimacy of the post. But it looks like the poster is in fact real.

Gamespot’s senior social media producer, Gajan Kulasingham, has taken a picture with the newest promotional standee out in the wild. The look on his face says it all.

The Sonic poster is real… 😭 pic.twitter.com/zXxtR8T5L0

The poster features the Blue Blur resting on top of the Golden Gate Bridge. In the distance, you can see the trail of light left by the speedy mammal.

The fact that we see the Golden Gate Bridge in the image is a little bit confusing. The IMDB description for the film says it is set in the rural town of Green Hills. It’s possible the town on the other side of the bridge is Green Hills in this fictional setting or maybe the hero travels to San Francisco.

There is another unconfirmed concept image for the Sonic movie floating around the internet. The poster is said to be a proof of concept for the character, as many things about his design have been changed.

Only time will reveal the answers to the many questions that everyone still has about the film. One can only hope that a teaser trailer will release soon. Especially with all of the marketing for the movie that has been seen as of late.

2019 will be a big year for video game movies. With not only a Sonic film coming to the big screen, but also the Detective Pikachu movie coming to theatres in the Summer.

The Sonic the Hedgehog movie will release nationwide Nov. 8, 2019.