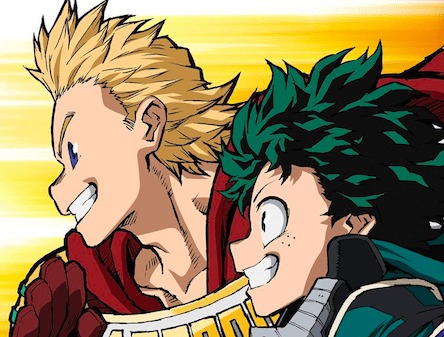 The next season of My Hero Academia is still a little ways off, but fans now have a firmer idea of when they can jump back into the smash hit anime series’ world.

In a tweet made by the official Japanese My Hero Academia Twitter account, it was revealed that the series would begin broadcasting once again in Oct. 2019. Past this, no firm premiere date was provided.

The announcement also came with a new key visual featuring Izuku Midoriya, or Deku, alongside Lemillion, one of the highly talented and powerful “Big Three” at UA Academy. Lemillion stands as one of the most powerful students at UA and a goal for Deku to strive toward in his training to become the top hero in the world.

Though it only shows the two characters in action poses, it does reveal Lemillion’s costume for the first time, adorned with the number 1,000,000 on the chest.

Deku and Lemillion encountered each other briefly at the end of the last season, but the visual hints that their journey toward becoming heroes will be more intertwined.

Lemillion’s master, Sir Nighteye, was also hinted at as someone who could help Deku further understand and hone his powers, pointing to a possible team up if Deku begins to train under him as well.

The full key visual can be viewed down below.

Based off of the popular manga series, the My Hero Academia anime has seen widespread popularity since its premiere in Apr. 2016. It tells the tale of Izuku Midoriya, a young boy who is entrusted with the task of becoming the world’s greatest hero by All Might, the greatest super hero the world has ever known.

The series has recently enjoyed forays into other media as well, with the film My Hero Academia: Two Heroes and the game My Hero: One’s Justice both released this year to high sales and general praise.

For more on all things My Hero Academia, check out our dive into the Vigilantes spin-off manga and how it builds upon the darker elements of the series’ world.