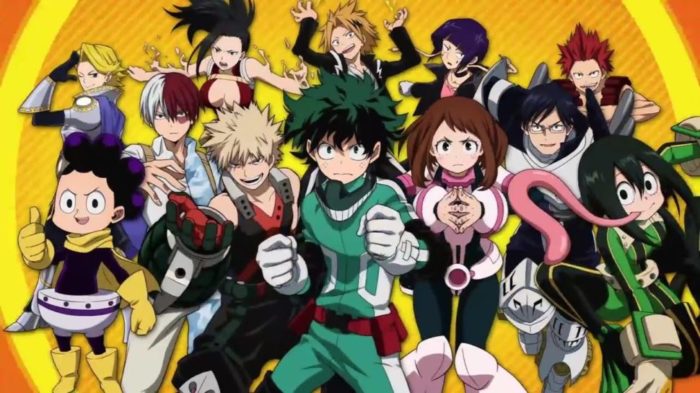 You don’t have to be a fan of anime to at least have heard of the juggernaut series that is My Hero Academia. Even gamers are slowly becoming aware of its existence with a video game releasing later this year. While the series truly burst into mainstream popularity thanks to its anime, My Hero Academia’s manga has been a hit ever since its debut in Weekly Shonen Jump. 19 manga volumes, an upcoming movie and three seasons of its anime later, the first volume of its spin-off series is finally receiving a print release in the West.

Though it has been in publication since Aug. of 2016, a mere two years after My Hero Academia’s initial release, My Hero Academia: Vigilantes is getting its English print debut on July 3, 2018. As a collector of physical manga volumes, this news is particularly exciting considering I have been silently avoiding any spoilers from this spin-off series as the manga chapters have slowly built up. Though, I did check out the first chapter when the series made its digital debut in America’s Weekly Shonen Jump, and I’m very much pleased to say that Vigilantes is brimming with potential and introduces several darker concepts that the original series may be too timid to break into. This is also a great introduction to the many grand, untold stories that exist within the My Hero Academia series.

For those of you that are unfamiliar with the concept of My Hero Academia, it is a manga series by mangaka Kohei Horikoshi that takes place in a world where most of the population have developed superpowers called “quirks.” Thanks to these quirks, heroes and villains fight daily battles for their personal motivations and ideals, a concept heavily explored in the more current chapters of the manga. The series’ main character, Izuku “Deku” Midoriya, was born without a quirk, yet he strives to one day be like the number one hero: All Might. After gaining powers of his own, Deku is later accepted into the greatest hero school in Japan, UA, where he comes face-to-face with his own clashing ideals along with the many different consequences that come with doing the right thing while breaking hero-regulations.

My Hero Academia: Vigilantes takes place in the same world as the original series, and occurs primarily in the same surrounding cities affected by Deku’s and class 1-A’s adventures. Written by Hideyuki Furuhashi and illustrated by Court Betten, Vigilantes is a darker take on Horikoshi’s creation, taking a close look at the underbelly of a society overrun with heroes and questioning the very existence of licensed, pro heroes. As the series’ name suggests, the story is centered around the many undocumented vigilantes that exist with in the My Hero Academia universe who choose to fight crime without interference from the very prominent government. Where the original series attempts to focus on young heroes-to-be as they are taught the strict concept of following rules even at the expense of citizens’ lives, Vigilantes seeks to call out this society of pro heroes. It describes them as beings that consider themselves above the law and deserving of great recognition, familiar themes associated with major villain Stain from earlier parts of the series.

From the beginning, though, Vigilantes seeks to unmask these heroes for what they truly are with its own lawless vigilante, the mysterious Knuckleduster, whom, from his boisterous introduction, is incredibly vocal about his distaste for licensed heroes who can’t bring themselves to care about street-level crime. Being an undocumented, masked hero, Knuckleduster is seen as a major threat to citizens and as a villain in the eyes of pro heroes. However, Knuckleduster conveys to readers that everyday heroes don’t necessarily need permission from the government to do the right thing for small people. Instead, he wants to protect citizens through his own sense of justice, whether that means brutally beating or even killing his enemies.

Vigilantes’ main character is also the perfect addition to this world considering the serious subject matter and his possible role as the storyline unfolds. Much like Deku, Vigilantes’ protagonist, Koichi “The Crawler” Haomawari, is just a simple, kind soul that wants to be recognized as a hero, but unlike My Hero Academia’s miniature All Might, Koichi has a quirk, though it is definitely one of the more useless ones out there. The Crawler’s quirk is Slide and Glide, which allows him to slide across any surface a bit faster than a bike as long as he has three limbs touching the surface.

His easily malleable personality is a natural fit for a story such as this because of Koichi’s blind faith in heroes upon his introduction. Like Deku, Koichi admires All Might more than any hero and wishes to utilize his less-than-impressive quirk to become a hero that people will call on whenever trouble is near, but at the precise moment that he calls for his role model, he loses faith as no one comes to his rescue. Only the vigilante Knuckleduster is brave enough to stand up against the drug-enhanced threats, which propels The Crawler into a web of conspiracies and threats surrounding the ugly underworld of this great hero society.

Vigilantes also provides a much more similar story to Western comics, focusing of the aspects of isolation and one’s own justice. The original series may begin with this themes of lonesomeness with Deku, but as he gains powers and friends, viewers slowly see Deku grow into a more confident, stronger character thanks to his classmates and teachers. Koichi is alone, however, forced to run from authority and order because of his vigilante status and his betrayal by pro heroes. Rather than cooperating with the law and being celebrated by citizens and the government, much like the X-Men, vigilantes will forever be seen as lowly lawbreakers that only wish ruin towards the safe, protected society that the pro heroes have built. Surely, as the series goes forward, Koichi will slowly discover the heart-wrenching duty that comes with being a hero and the many difficulties of choosing the life of an illegal vigilante as he adopts brand new ideals on evil and justice while following his new, dangerous role model.

Packed with the many possibilities of a further and expanding an already-classic series, My Hero Academia: Vigilantes is sure to be an enormous smash with fans of the superhero genre. With no anime announced, it’s impossible to say how many American readers will latch on to Vigilantes and become die-hard fans, but future volumes are set to release later this year. In-between your adventures with class 1-A, catch another gripping tale of heroes in Vigilantes.