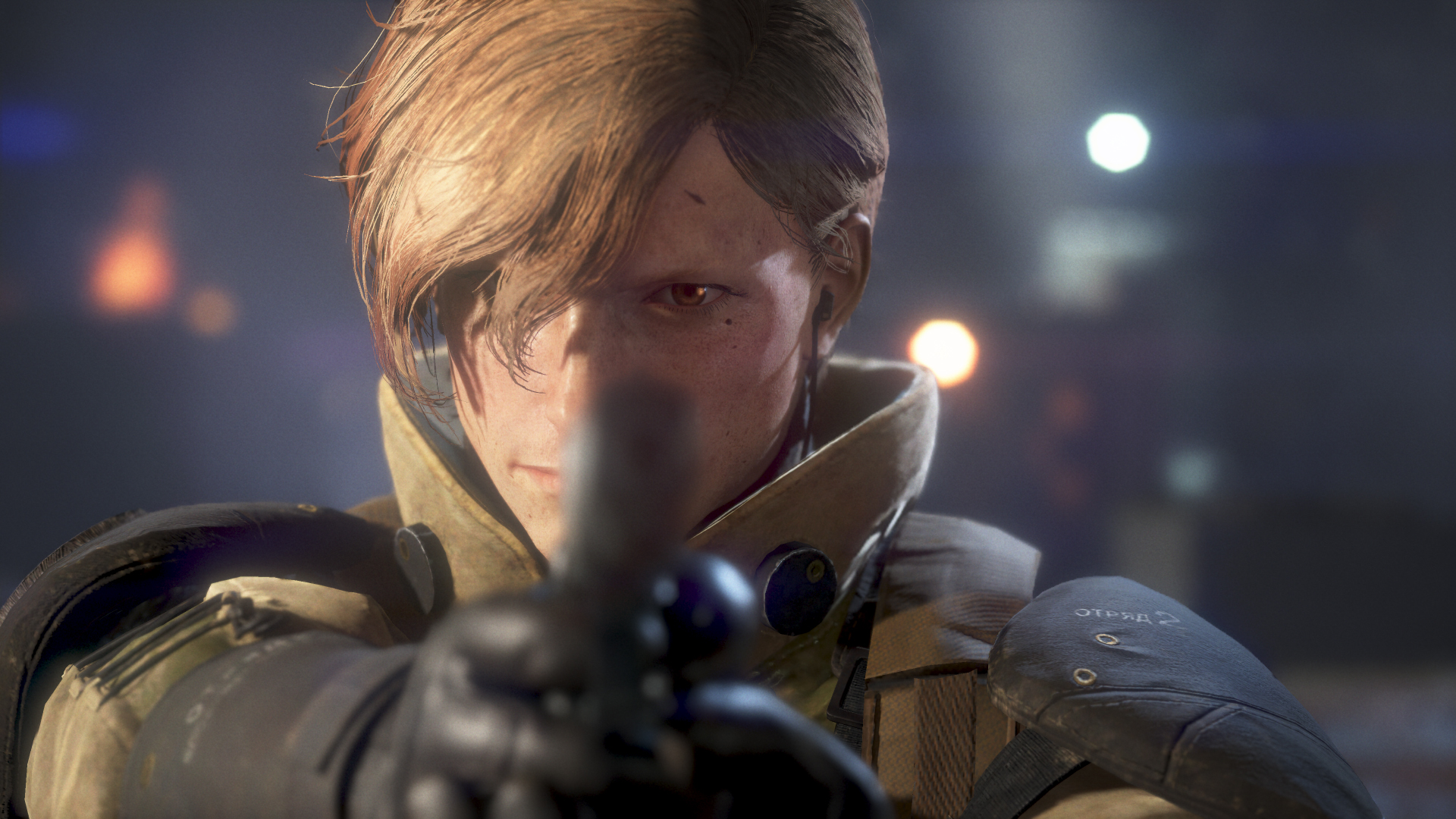 First of all, we get brand new artwork by famous Metal Gear Solid artist Yoji Shinkawa, featuring the three playable protagonists of the game.

Then we move on to a detailed presentation about the story of one of the protagonists, Mikhail. He is a young Wanzer pilot stationed in the city of Novoslava. Many of his platoon mates are killed by the overwhelming power of the invading army, and before he realizes it he finds himself isolated on the battlefield.

While trying to join up with friendly forces, he meets a journalist named Patrick, who indicates an escape route. Although Mikhail doesn’t trust him, he has no other way to survive than cooperating with him and exchanging information. He will soon get caught up in the dark secrets behind the war, including the theft of a brand new Wanzer prototype.

We also meet two characters. Ivan Nikolaevich Zaitsev is a pilot of the invading Garmonian army who appears in front of Mikhail. Speculation sparked by his suit indicates that he might be a collaborator from Novoslava, since he is dressed in a similar way as the protagonist.

He is working hard to search for a Wanzer prototype secretly manufactured in Novoslava, and he is pursuing a man named Bonin, who is involved with that.

Patrick Lemaire is a journalist from France. He’s a man with a rather sketchy aura who strikes a deal with Mikhail. He was visiting Novoslava for an interview, but apparently, he knew about the impending outbreak of the war through his own information channels.

Amidst the war, he has found a lead on the data leak of the new Wanzer prototype, and he is following it to crack the case.

Speaking of the Wanzer prototype, enter the Zenith HW2. It’s manufactured by Jade Metal-Lyman, and it’s the second-generation of the HW series, designed to become a standard model worldwide. It featured a strengthened dash mechanics more powerful than the previous models.

It demonstrated stable performance in every scenario, to the point that it earned a reputation for turning disadvantages into advantages.

We also get details on the gameplay loop of Left Alive. Players fight alone with few resources, while they have to face a whole army of fully-armored troops, not to mention drones, tanks, and even Wanzers. Yet, there are several ways to traverse the battlefield and various means to triumph depending on the situation and play style.

Fighting is only one of those ways, and players won’t be able to survive unless they master stealth and scavenging for items to be used against the enemy army.

Of course, players who are skilled and confident enough can challenge enemy troops in gunfights, and searching the battlefield will yield more ammo. Things like metal pipes and shovels are also viable weapons in this environment if you can get close enough to use them.

Always charging recklessly into battle in Left Alive is pretty much suicidal. Even items that aren’t proper weapons like fireworks and smoke signals can be used to distract the enemy. Combining them with other items it’s also possible to create more useful implements.

Stealth is, of course, a viable solution for many encounters, hiding behind obstacles and staying out of the enemies’ sight as they patrol the area. However always staying hidden may not always be advantageous, sudden close encounters with strong enemies like tanks may result in sudden death.

It’s nearly impossible to get through every situation in Left Alive with stealth, and battles may be almost inevitable, but bullets are always scarce. By using materials scattered through the maps and crafting various items, players will be able to even the odds a bit. Things that can be crafted include automatic turrets and electroshock wire traps. You can even board enemy Wanzers and have fun experiencing their power.

In Left Alive there are alternate routes to each destination. If you have issues breaking through many enemies, you may find other ways by exploring the surroundings. Whether you aim for the shortest route or look for a safe detour is up to you. However, both options are risky because enemies will search the area and move around.

Enemies include infantry who can be knocked out one-on-one but are very dangerous in groups and can surround the player quickly. Challenging overwhelming numbers without a plan is extremely dangerous, and even if you come up on top, you’ll waste a lot of resources.

Battle drones are unmanned weapons that scout the battlefield from the air. When they discover the player, they attack immediately. They’re less resilient than foot soldiers, and single drones are a smaller threat on their own. Yet, they can inform nearby enemies of your presence and if you’re discovered you’ll find yourself surrounded in no time.

Tanks are deployed to guard key areas and support the infantry. Being discovered by a tank means almost certain death. Basically, you should avoid approaching them, but you might be able to knock them out of action if you find the means.

In Left Alive the player is supported by an AI name Koshka, and the destination of each level is displayed on a map at all times. It also includes useful information to determine the route you want to follow. Since there is never only a single route to the goal, it’s up to the player to decide whether they want to follow the shortest route, a safer but longer one, or explore the whole map to gather as many materials as possible.

Besides the destination, the map shows area alert displaying a rough estimate of the enemy forces. In areas with a high alert level, there are many enemies, so it’s better to avoid them. Also, if you cause a disturbance with combat or explosions, the alert level in the specific location will increase, but it will drop in nearby areas. By using this to your advantage, you can create a safe route yourself.

High alert areas are displayed on the map with red circles, medium alert areas have orange circles, while safe ones are showcased with blue circles.

You can check out the images below. You can also watch the gameplay trailer released today while we expect to see more tomorrow in a dedicated livestream from Tokyo.