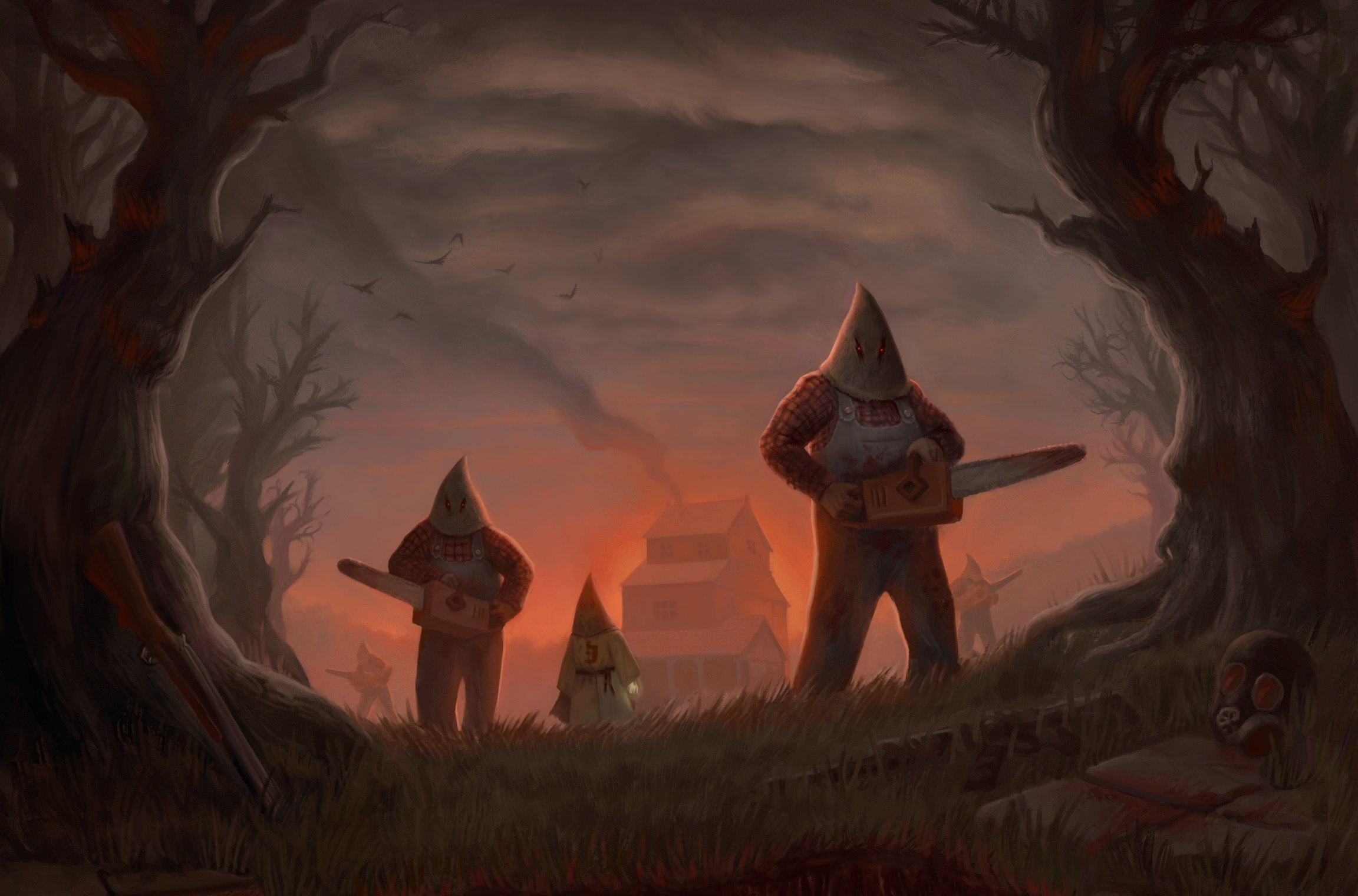 If you have spent enough time on message boards and forums for the past several years (or ever paid attention to the YouTuber GGGmanlives), you’ve probably heard of this little game called DUSK. You probably also wonder why almost everyone who plays it seems to praise it and if it’s as good as they claim. I am pleased to say the game is, with utmost certainty, nothing short of the second coming of classic FPS sensibilities.

DUSK is a glorious throwback to the shooters of the 90s and is a chimera stitched together from their best attributes. The game has all the graphical fidelity of Quake, the gunplay of DOOM and Duke Nukem 3D, and the “we don’t care about political correctness” stylings of Redneck Rampage. Oh, and a smattering of Silent Hill-esque horror for flavor.

DUSK’s game world is as polygonal as you can get. Everything has or is jagged edges; textures are blockier than Minecraft, and animations are stiff and simple. Even the mist that obscures distant locales looks hard and flat, all in the name of flawlessly recreating the look of 90s shooters. But, the sharpness doesn’t end with the graphics.

DUSK’s soundtrack is full of edgy, heavy metal (or is it death metal?) riffs that will get you headbanging in no time, all thanks to the mad mastermind behind Brutal DOOM’s and Quake Champions’ soundtracks, Andrew Hulshult. In fact, more than a few of DUSK’s songs are worthy of your personal playlist. You’ll find your own favorites, but mine are Hand Cannon, Erebus Reaction, and Flashbacks.

Now that I’m done gushing like a fountain of blood over DUSK’s presentation, you probably want to know how the game plays. Well, it plays like someone gliding around a greased-up ice rink with skates made of butter. DUSK is so fast it doesn’t need a run button, and that’s a good thing.

When it’s at its best, DUSK is about running through combat arenas like a madman, dodging bullets and hellfire while shooting your own weapons and praying the game runs out of bodies before you run out of ammo. The controls are slick, responsive, and so fast it’s as if friction transformed from a universal constant into a mere suggestion. DUSK’s fast combat has a bit of a learning curve, especially if you’re used to modern FPS titles. Still, you’ll get used to DUSK’s controls eventually. If not, you’re going to get real acquainted with the Game Over screen.

Like all 90s FPS games, DUSK doesn’t have regenerating health. Shocking, I know, so players who want to survive need to seek out med kits and armor. Well, the armor stand-in known as morale, represented by gold and diamonds. Sometimes, DUSK hands out surplus med kits and morale; other times it forces you to ration them, but regardless of how much the game doles out, you will only have as much as you deserve, depending on your skill. Oh, and before I forget, DUSK features a 100 health point limit that can be broken with magic potions and the Hallowed Health power-up. Given the enemies in the game, you’ll need every last one.

Now, what would an FPS game be without a rogues’ gallery of varied enemies that keep you on your toes? Call of Duty. I kid; I kid, but seriously, DUSK has one hell of a creative roster of demonic opponents, and they all serve different roles in battle to give players a devilish challenge.

Some enemies, such as the Leatherneck, rush at you like disposable Dr. Salvadors, while the Mages stay back and fire slow fireballs. And then there are the Cowgirls, those towering nightmares of twisted flesh and steel that stroll towards you as they fire salvos of rocket-fueled death. No two enemies should be dealt with the same way, and running around them in circles (i.e., circle strafing) will only get you so far. But, once you have cleared a room, you can look at all the corpses and feel accomplished. Plus, each enemy has a distinct sound cue, be it footsteps or moans of ecstatic pain, so you always have some warning of what’s around the corner.

You have two ways of dispatching enemies in DUSK. The first, and most reliable, is shooting them with your guns. It’s kind of obvious when you think about it, but there’s a reason you have so much pistol ammunition, and it isn’t to trim hedges.

Each weapon fills a specific role, from the Hunting Rifle’s sniping capabilities to the Mortar’s grenades that can be lobbed around bending corridors. Each weapon has its own ammo pool (except for the Shotgun, which shares ammo with the Super Shotgun to make players decide between speed/range and power/spread). More importantly, whenever you find a second Pistol or Shotgun, you get to dual wield them akimbo style. It’s as bad ass as it sounds.

Moreover, DUSK features two distinct combat power-ups. One lets players fire their weapons at infinite rounds per minute; the other basically turns the game into SUPERHOT. Whether you like to chew through ammo or conserve it, DUSK has got you covered.

What is the second way to dispatch enemies, you may ask? Why, infighting of course. Yes, this friendly fire feature from DOOM resurrects in grand fashion and is an excellent way to turn the tide of battle and save ammo, and all you need to do is make one enemy hit another. There’s something cathartic about watching floating suits of armor animated by hate and pain clean house for you after they’re hit by an errant fireball.

Of course, there’s no point in slaughtering enemies in an FPS game if the levels are bland, and DUSK’s levels are anything but. They run the gamut from creepy farmland to evil laboratories and literal Hell. Each level is visually distinct from the rest and features at least one stellar set piece, such as a satanic church being torn apart by a tornado powered by the souls of the damned or a physics-defying island dotted with gravity-warping artifacts. Every level is gorgeously realized and will make your jaw drop despite its polygonal nature.

If you’ve played modern shooters, you have probably been spoiled by checkpoints. Well, DUSK doesn’t hold your hand and will punish if you don’t obsessively save every five minutes. And you will need to hammer the quicksave button since DUSK is balls to the wall hard.

When I say DUSK is a difficult game, I mean it. The game loves to throw enemies your way like handfuls of gun-wielding confetti who will kill you in a matter of seconds from literally every direction possible. However, DUSK isn’t unfair. Despite the odds, the game’s levels offer plenty of options when it comes to dodging, be it breaking the line of sight with obstacles or circle strafing.

DUSK also balances out the difficulty by rewarding exploration with extra ammo, health, and weapons. These are hidden in secret areas (or dangling just out of reach), usually behind grates, buttons, and movable panels that are also hidden behind boxes and exploding barrels. You actually have to search high and low for these rewards, and you feel like Indiana Jones whenever you find a trove of goodies.

Sometimes DUSK will troll you, and I don’t just mean by dangling the most powerful weapon in front of your face, just out of reach. Occasionally, the game hides a secret behind an illusory wall that looks like any other impassible wall; other times, a switch is intentionally mislabeled, so instead of exiting the level, it drops you into a pit filled with enemies. DUSK is nowhere near as much of a trollfest as games such as I Wanna Be The Guy, and there is some insane logic to its madness. DUSK’s trolling is more annoying than actually unfair, and it’s done sporadically, so it never loses its effectiveness.

Now, don’t go into DUSK expecting a deep story. It is a 90s FPS game at heart, after all, so it’s mostly about pressing switches and collecting keys to open doors. But that’s not to say DUSK doesn’t have a story, as it is told through environmental storytelling and the occasional psychic, voice-acted message rather than cutscenes. Even the game’s first few seconds, which pits players against three Leathernecks with only two scythes for defense, helps tell a story, as well as set the tone for the rest of the game.

While the developer (yes, developer as in the singular) was able to speed through each of DUSK’s levels in under five minutes, I averaged around 15-30 minutes per level, which brought my total playtime up to 12 hours over the game’s three episodes. Much of this time was spent wandering Episode 2’s levels, which traded in many of Episode 1’s open arenas for confusing corridors. Thankfully, Episode 3’s levels were much more tolerable and didn’t repeat Episode 2’s mistakes. Plus, Episode 3 ramps up the horror with terrifying effectiveness. I actually jumped a few times in genuine fright.

Of course, my experience with DUSK wasn’t completely flawless. I noticed two serious problems. First, even though the game comes with controller support, whoever created the layout picture screwed up big time. The picture claims the left and right triggers swap weapons; the left bumper zooms in the camera, and the right bumper fires the weapons. In reality, the bumpers swap the weapons, and the left and right triggers zoom in the camera and fire weapons, respectively. This is extremely weird since the WIP layout picture on the game’s October update announcement doesn’t have this issue. What happened?

The second problem, however, was much more troubling. It wasn’t anything game breaking, but when I entered the last level, I spawned without any weapons. I could still pick up ammo, but I couldn’t fire anything. I assumed this was intentional, but it wasn’t; the game just forgot to give me weapons, which made the final boss (a gunman who jumped around like a rabbit hoped up on caffeine) impossible. Thankfully, I was able to fix this glitch by saving in the level and loading that save, so this issue is probably one patch away from being fixed.

Normally, I would talk about the multiplayer component here, but I couldn’t get a good match running. I got to explore the multiplayer maps, though, and discovered matches would have played like classic deathmatches where you run around an arena, collect weapons and power-ups, and kill opponents for points. On the bright side, though, if multiplayer doesn’t gain any steam, at least you’ve got DUSK’s Endless mode. Nothing says challenge quite like endless waves of enemies.

Overall, DUSK is a devilishly good game. It will frustrate you, yes, but that’s the point. The game wants you to claw at victory and feel as though you’ve actually accomplished something when you obtain it. Plus, DUSK features multiple difficulties if you want to squeeze even more out of the game, including Duskmare, where every attack turns into a one-hit KO. Oh, and the game has plenty of achievements, including a speed-runners paradise that requires you to beat the developer’s already insane best times.

If you want to relive the halcyon days of the FPS genre, a time when games strove to be unrealistic and challenging, you can’t get any better than DUSK. Here’s hoping for future episodes.