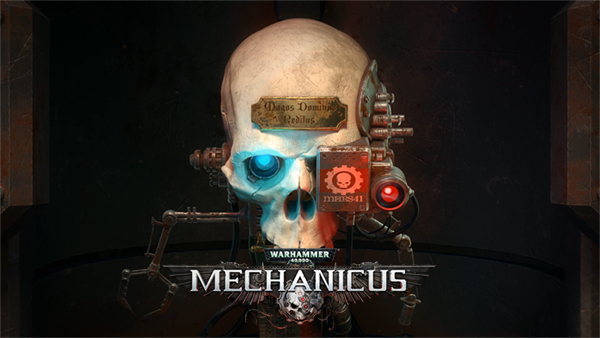 The Warhammer 40,000 property has had a rocky history with both incredible and terrible video game releases. While Dawn of War remains a beloved strategy classic, titles like Warhammer 40,000: Gladius show not every studio can successfully carry Warhammer’s legacy.

This different perspective was an excellent creative decision by Bulwark Studios. With challenging tactical decisions and unique additions to its unit roster, the game steadily solidified an already solid impression. Even as I delved further into the game, the strangeness of the Adeptus Mechanicus remained compelling throughout my experience.

Warhammer 40,000: Mechanicus chronicles the journey of the Caestus Metalican orbiting the dead world of Silvia Tenebris. As Magos Dominus Faustinius, players lead a large force of Tech-Priests and Skittari troops attempting to contain a Necron threat they initially created.

Strong writing and thorough characterization of the player’s lieutenants were immediately apparent when starting a campaign. As a cohort of Tech-Priests moved through a Necron tomb, lieutenants would chime in on the current mission’s priorities.

Whether it was my Tech Acquisitor Scaevola advising Xenos data collection, or Lector Dogmatus Videx extolling a Cult Mechanicus virtue, each character felt vibrant with a unique point of view. Ideological spats also occurred due to clashing viewpoints, and endeared each lieutenant all the more.

Ultimately, the player’s tale within Warhammer 40,000: Mechanicus revolves around the limited series of missions that can be undertaken. An increasing Necron Awakening meter meant plenty of tasks remained unfinished at the campaign’s conclusion.

The Awakening mechanic forced careful planning and consideration. Balancing research acquisition, Xenos purges, and high-priority targets made for a highly-rewarding campaign experience – one in which choices mattered.

The branching mission choices gave interesting context to exploration, adding benefits or drawbacks before tactical engagements. A growing collection of units, Canticles, and technology showcased how different personal campaigns could have progressed.

Warhammer 40,000: Mechanicus belies a fantastic amount of tactical depth in its gameplay. As each successful mission unlocked tech to outfit squads, the game’s initial lack of challenge turned into tense encounters with new enemies.

Accordingly, the tactical side shined the further I dove in. After an entire squad fell during my campaign, I realized Mechanicus never guaranteed success to the player.

Thus, I took on the task of outfitting my cohort with the best available weaponry. My dinky phosphorous pistols turned into immolating flamethrowers, capable of reducing entire groups to ash. Never again did my squad fall – although the combat’s challenge remained there.

Combat in Warhammer 40,000: Mechanicus consists of ordering units across a tile-based grid. The system reminded me of XCOM, with a few exceptions.

The most significant alterations included guaranteed attacks and the lack of defensive bonuses. Compared to XCOM’s prioritization of cover, Mechanicus’s combat seemed to prioritize aggressive mobility above all.

Cognition expenditure meant units could cover ground quickly to engage enemies. In combat, I found myself getting within range to finish off enemies before maneuvering behind high walls. Managing tactical cognition made combat tense, as I debated whether to rally or press the Necron hordes before me.

Where XCOM could at times feel frustrating, Warhammer 40,000: Mechanicus always felt exhilarating. Even as higher-damage enemy units appeared in the campaign, I always felt my cohort could hold their own against them.

Tying together these great story beats and nail-biting combat was flawless execution with Mechanicus’s presentation. Whether that was the cybernetic augmentations adorning troops or the techno-gothic soundscape, everything fit believably into the 40K universe.

It’s commendable that the team behind Mechanicus was able to portray such a vibrant atmosphere with clear budget limitations. Only hours in did I notice that each game-state had a single accompanying track to match. But this flaw was easily forgiven because of each track’s quality.

The same accusation applied to the dialogue itself. As the Mechanicus communicated in a guttural robotic modulation, the lack of voice-overs grew apparent. But when Necron lords spoke fully voiced, I found myself respecting the clear budgetary concession to wrap into player immersion.

From start to finish, Warhammer 40,000: Mechanicus felt like a well-planned, well-executed effort despite a lack of AAA backing. In conveying a believable setting, smart implementation shines through each element of its presentation.

Warhammer 40,000: Mechanicus triumphs as a thinking man’s strategy game. Stellar writing and superb atmosphere combine to create a unique take on the 40K universe. Consequence-heavy choices in exploration add critical thinking to better aid the Mechanicus cohort in combat. And through prioritization of each lieutenant’s agenda, campaigns could conceivably branch into different outcomes.

The game’s limited budget was well-hidden with intelligent creative decisions, making such gripes a non-issue. As such, Warhammer 40,000: Mechanicus proves itself as a spectacular breath of fresh air for the 40K franchise.