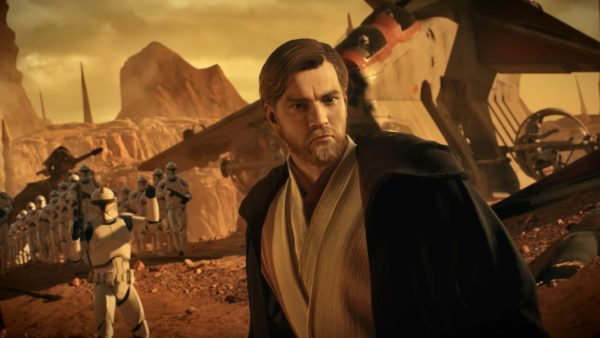 Few heroes of the Star Wars saga are as loved as Obi-Wan Kenobi, especially nowadays with the new trilogy polarizing the fanbase. EA DICE announced that the Jedi who mentored Anakin and Luke Skywalker is finally joining the cast of Star Wars Battlefront II next week.

Obi-Wan will become a playable hero as part of the new Battle for Geonosis Update, which will be release next Wednesday, November 28th, for PS4, Xbox One, and PC.

The update will also include more appearances for General Grievous, the STAP and BARC speeders, and the AT-TE walker. Fans of the Clone Wars will also be able to unlock the appearance of Kenobi’s own 212th Attack Battalion for the clone trooper.

The Jedi master himself will be able to fight with his iconic lightsaber, unleash a powerful force blast to knock his opponents back, rush forward while deflecting attacks and damaging everything in his path, and disrupt enemies with a mind trick that prevents them to use abilities.

Below you can check out his looks in a new trailer, alongside a couple of images showing different appearances.

Star Wars Battlefront II is currently available for PS4, Xbox One, and PC. You can see what we thought about it in our review.