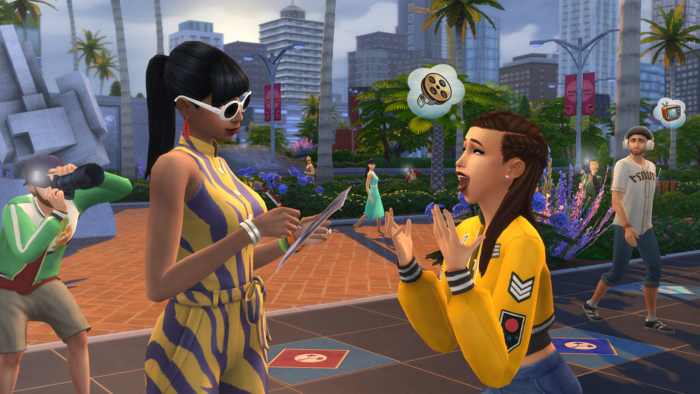 The Sims 4 Get Famous on PC

As Twinfinite’s official Sims enthusiast, I’m back at it again with another review of the latest expansion to grace our wallets. The Sims 4 Get Famous is here to act as a modern day version of old expansions that introduced fame to the series.

Like with all new packs, the reigning question rings true still: Is there enough to warrant the price tag?

After all, with Get Famous being an expansion pack and not a stuff or game pack, it’s going to cost you $39.99.

Do I think that’s a bit steep for this pack? Yes, right off the bat, I’m going to tell you that I sort of do. This isn’t one of the expansions that I’d wholeheartedly recommend.

That award goes to expansions like Parenthood, Pets, and Seasons. Those packs change the game in a way that makes it impossible to go back to vanilla.

And that’s exactly what we should be expecting out of expansion packs.

Get Famous, while it adds celebrities, fame, and a new active career in Acting, it feels like a neat gimmick you’d play once or twice. Sort of like Vampires.

The difference here is that Vampires was a Game Pack, so it’s natural to feel that it’s tacked on. It costs $19.99, it has an added world, stuff, and a whole new life state.

Meanwhile, in Get Famous, there’s a new world (Del Sol Valley), stuff, career, and one could argue that being a celebrity and amassing fame is a new life state (as it even adds a perk system akin to Vampires).

Now that I mentioned Del Sol Valley, by the way, I’d like to echo the woes that many people have already done when they previewed the game.

I’m sure you’ve heard this before, but it’s too small. Which is a real shame, considering that the design around Del Sol really is great. It’s right on par with Brindleton’s world design.

And yet, they gave us 11 lots. Compared to the previous expansion of Seasons, sure that’s great – because Seasons didn’t introduce a world. But it did introduce something that fans all agree is crucial to a perfect Sims experience.

The weather and calendar of holidays changes the game so much. At that point, who cares if we don’t get a new world because each world morphs with each season into whole new experiences.

So let’s go ahead and compare that 11 with the expansion before that: Pets. 15, the number’s 15. Brindleton Bay brought us a beautiful, alive world that we hadn’t experienced before, and gave us 15 lots to build to our hearts’ content.

I don’t condone giving any less than the new standard set each time, because it really does harm the builders that play.

That doesn’t include me, by the way, I have zero creativity for building. But I can’t ignore the subsection of fans that would be affected by decisions that don’t really make sense.

But let’s dive into the cool features added in with this expansion. Fame can now be garnered by doing all sorts of things. You don’t have to just be an actor to do it, either.

You can literally choose any career and if you amass enough fame through your actions in the world, you’ll be a world-famous chef, hacker, painter, whatever.

Becoming famous enough gets you perk points, which you can use on the new perk tree specifically for fame.

There’s quite a bit of options here that you can choose from, but again, I feel like it’s really only an afterthought once the honeymoon phase of playing with it has gone away.

I think the best new feature when it comes to fame are the quirks your sims can develop based on their actions. Whereas with Vampires, you actively chose the quirks that made your vampire unique, in this one, the game randomizes it and gives it to your sim.

Having your sims receive something from the game based on your playstyle is great for making unique playthroughs happen. It’s what I really enjoyed about Parenthood. Based on actions, you got whole new traits.

And I can happily inform you that the concept is back again in a new way in Get Famous with the reputation system that’s added in.

Your sim’s actions – be they good or bad – will affect reputation. This is separate from your fame and affects how you’re perceived in the world.

You can unlock new perks within the fame tree based on whether you’re more positive than you are negative. And, as I mentioned, your fame is separate.

So you can make a crazed, ultra famous sim that picks beef with other celebrities and fights paparazzi. They’ll be known for causin’ all the drama in Del Sol.

I won’t lie that these aspects are very neat, and the other stuff is well done. I like a lot of the new build and buy items you can place around, and the hairstyles, too. Can’t say the same for the uber flashy clothing, but that’s alright.

Oh, and the acting career is definitely the best out of all the active careers we’ve seen so far in the game. But, much like all those other jobs, you’ll find it becoming repetitive really quick.

Again, as a whole, Get Famous is not one that I’d say you must play The Sims 4 with.

What’s added is good enough to not make it a complete waste of money, so I wouldn’t either say, “Skip this one!” But I can’t without a doubt recommend it to every single The Sims 4 player. What’s added is well done, though, and it’s truly a change that’s going to be welcome to a lot of the roleplayers out there.

Get Famous won’t go down in the annals of the all-time best The Sims 4 expansion packs, but it’s not too low in the totem pole, either.

It should only be purchased by those of you that are either so into the game that you need every single pack that’s released, or if you find yourself playing the roles of very lavish, famous sims often. This definitely does help in roleplaying that.

If you’re looking for a new The Sims 4 expansion pack, you can’t go wrong with choosing this one, but you also have better options if you haven’t bought any in awhile.