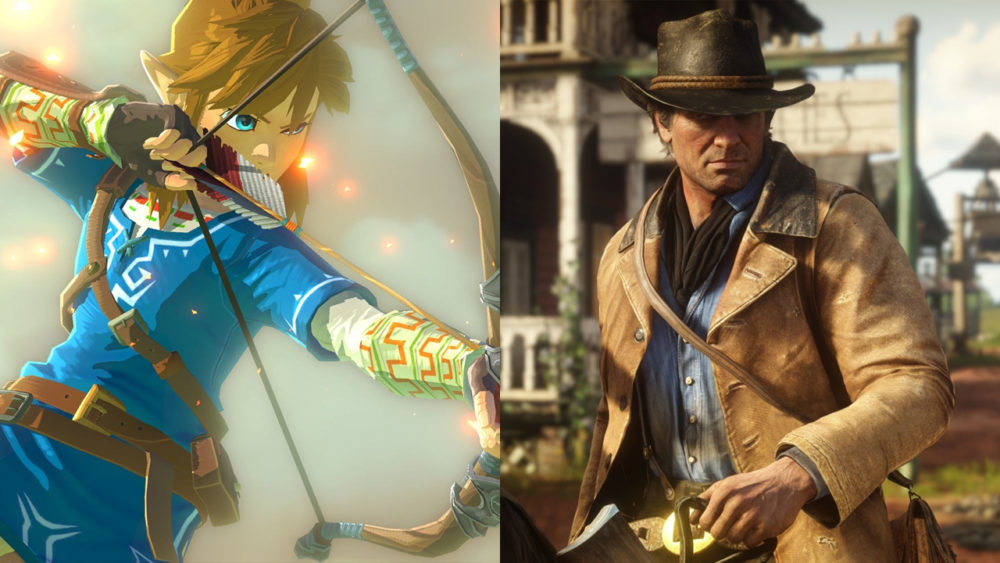 Many modern games have some of the most beautiful and stunning worlds we have ever seen, though it sometimes feels like they aren’t being used to their full potential.

While games like Assassin’s Creed and Far Cry have gorgeous environments, they tend to be flooded with map icons and quest logs, making players feel like they are checking off a to-do list rather than living in the world.

These games often feel like they are moving at an accelerated pace in order to quickly lead the player from one activity to the next. This can certainly be a fun time, though it can hurt a player’s sense of immersion.

There are two recent games that buck this trend in interesting ways. Rockstar’s Red Dead Redemption 2 and Nintendo’s Legend of Zelda: Breath of the Wild.

At first glance, there doesn’t seem to be much of a link between these two games. Red Dead is extremely realistic, mature and violent, Zelda is comparatively more lighthearted, colorful and kid-friendly.

Red Dead focuses on story over gameplay, Zelda does the opposite. Aside from being long open world games, they seem to be at opposite ends of the spectrum.

However, the crucial connection between these games is that they both ask their players to slow down, smell the roses and get lost in the world.

Open worlds are a dime a dozen in the gaming industry, but what Rockstar and Nintendo were able to create stands out. Both games thrive on a sense of mystery and discovery, encouraging the player to explore the world and create their own stories.

Breath of the Wild is a game with minimal direction. While there are shrines and some story missions, the player is largely dropped in the world and left to their own devices.

At the start of the game, everything is a mystery. Can you climb that mountain? What can you pick up with magnesis? What combination of ingredients makes good food? Breath of the Wild is a game of questions, and it tasks you to go find the answers.

It’s this sense of discovery, exploration and personal accomplishment that makes Breath of the Wild special.

The game doesn’t bombard you with quests and map icons to check off, but instead trusts in its world to be entertaining enough to drive you to explore it.

There’s nothing like reaching the top of a mountain in Breath of the Wild after trying for 30 minutes and being rewarded with a breathtaking view of Hyrule.

There is nothing asking you to climb the mountain but the game makes you want to. Whether it’s a shrine, a Korok seed or simply a gorgeous view, Breath of the Wild’s world is always rewarding you for exploring on your own.

This hands-off approach makes discovering secrets all the more impactful because you were the one who discovered them.

I’ve played great open world games since Breath of the Wild, but I hadn’t found one that quite captured this feeling again until Red Dead Redemption 2.

While Red Dead does have a familiar mission structure, the game’s survival and player management systems and lack of traditional fast travel ensures that you will spend a lot of time traveling in its world. It’s here where the pace slows down and the game encourages you to exist in the world and take it in.

Red Dead Redemption 2 has some action-packed and bombastic missions, but between them are quiet moments riding in the wilderness, feeding your horse, hunting or just watching the sun set.

Like in Breath of the Wild, some of the most memorable moments in Red Dead Redemption 2 are the ones you make on your own by immersing yourself in the world.

Where many games seem like they are in a hurry to get you from point A to point B, this game wants you to enjoy the ride, and move at a slower pace.

As you travel in Red Dead Redemption 2, the world responds to your actions and rewards you for going off the beaten path.

Whether it’s strangers, gang encounters, NPCs or animals to hunt, the game is always going to have something interesting to see, even if you’re just wandering aimlessly.

Red Dead Redemption 2 leaves some of its best content for you to find yourself, rather than giving you a list of objectives to tick off.

Above all, it’s the sheer amount of detail that truly gives life to these open worlds. Being immersed in a game doesn’t have anything to do with character creation, or being able to choose dialogue options with NPCs; it’s about believing that the in-game world is real, and you can interact with it however you want.

Breath of the Wild and Red Dead Redemption 2 have their limitations, sure, but the level of detail in those games can completely hook a player and immerse them completely.

This type of game design isn’t for everyone, and it doesn’t fit every game. Some games are better suited for a fast pace and a constant stream of fun tasks. That being said, Red Dead Redemption 2 and Breath of the Wild both brought back the playground conversations I used to have about discoveries my friends or I had made in a game, and I love them for that.

When it comes to immersion and discovery, both of these games create unique experiences that could and should be used as inspiration for future open worlds.

For more on these games, you can read our 2017 review of Breath of the Wild and our more recent review of Red Dead Redemption 2, both of which received our highest possible score.