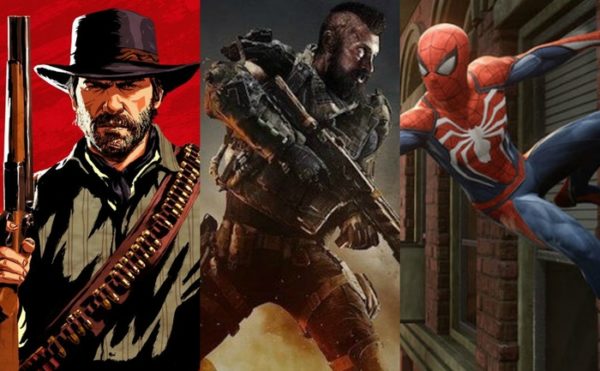 With the recent release of Red Dead Redemption 2 and the wild amount of positive reception that the game has garnered, there’s no question that the open-world western RPG will make waves when it comes to the top-selling games of the year. NPD analyst, Mat Piscatella, released a list of predictions back in July, giving us his thoughts on what ten games would end up drawing in the most money at the conclusion of 2018. But since the surprising record-breaking launch of Spider-Man this fall season and additional unexpected variables, Piscatella has reworked his predictions, giving us his decisive list:

Clearly, his list hasn’t been altered too drastically. The same ten games are on the list with just some slight movements. Red Dead Redemption remains in the number one spot even though it’s one of the last games to release in 2018 when it comes to big AAA titles. Piscatella has a bit more faith in Marvel’s Spider-Man than before, bringing it up three spots higher, pushing Fallout 76 down a few notches.

“Sony’s PlayStation 4 has had a quite remarkable run through the summer and into the fall, driven by a combination of smart promotion and excellent content support, particularly from Marvel’s Spider-Man. I can see either the PlayStation 4 or Nintendo Switch being the best-selling hardware platform of the year. I think it will come down to how many units of the $199 Marvel’s Spider-Man PS4 bundle will be made available through the end of the year versus consumer response to Pokémon: Let’s Go and Super Smash Bros. Ultimate. I still lean towards Nintendo Switch taking the top spot by year’s end, but also wouldn’t be surprised to see PlayStation 4 end as the year’s best-selling hardware platform.”

Piscatella states that this line-up for the holiday season for 2018 will arguably be the best we’ve seen in a decade making double-digit overall market spending growth in 2018 a likely outcome.