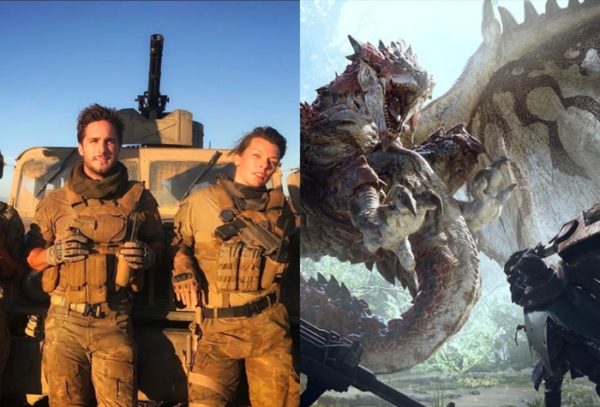 Milla Jovovich recently posted photos of her and her castmates on the set of the upcoming film based on Capcom’s Monster Hunter series which has made fans skeptical of the plot of the video game movie. The adaptation is being directed by Paul W.S. Anderson (Resident Evil, Death Race), who considers himself to be a huge Monster Hunter fan with this film being a passion project for him.

Going back to Jovovich’s photos from the set this past week, it seems that this film looks nothing like Monster Hunter. To be fair, the film’s synopsis strays quite a bit from the popular video game franchise, revolving around a military team that ends up inside an alternate universe full of monsters. These monsters then attempt to enter a portal back to planet earth, so Jovovich and her crew must then defend earth from the invading creatures. I know, it sounds ridiculous and unnecessary, but the director, Paul W.S. Anderson recently stated in an interview with Slash Film that the movie will be a faithful adaption of the series.

Anderson speaks on the characters that will be present in the film:

“It’s very much a movie of the video game, but in Monster Hunter you get to create your own character when you go in there. You don’t get to play Lara Craft or Jill Valentine. You get to play your own creation, and there is definitely an element of that in there. Some of the leading characters will be fresh characters but that’s a reflection of what the video game is. It’s definitely a movie that is firmly and fully entrenched in the world of the video game, as you would expect with me having worked with Capcom for nine years on adapting it and bringing it to the screen.”

When asked if Anderson was planning on bringing original monsters to the film, he responded with this:

“Listen, I don’t need to create any new monsters. There’s such a vast array of amazing creatures over the years. We’re leaning quite heavily on the favorite creatures from Monster Hunter World which is the latest game, but we’re also bringing in what I think are some of the fabulous monsters from some of the earlier games and well, and some of the imagery from the earlier games.”

It seems that Anderson is planning to bring back some spectacular moments from the older games in the Monster Hunter series, hoping to spur people’s excitement over the brand. With that being said, it’s definitely one of the best times to bring out a Monster Hunter film, specifically with how much success Monster Hunter: World has garnered here in the west.