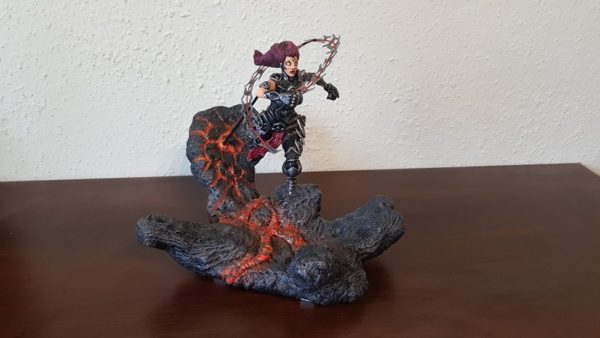 Darksiders III is almost upon us, as it releases in just a few days. In celebration of the game’s upcoming release, fans have created plenty of awesome pieces of art dedicated to it.

This fiery beauty is a stark contrast to War, as plenty of concept art and preview images depict her with flaming red hair and a blazing red whip. It was that art that inspired YouTuber Mr. Hary101, real name Markus Charyton‎, to sculpt this awesome Darksiders III figurine.

In the video below, you’ll see how Charyton molded Fury. Using polymer clay, the avid Darksiders fan created this figure, with the final product showing the sister Horseman jumping from lava, as he whip encircles her, ready to strike.

He detailed how he went about creating the figurine in the comments section of the video.

“I followed the example of the figurine which will be a part of the collector’s edition but the whole design of this work is my own idea. The figurine is made of polymer clay and the holder is made of wood.”

Many commenters note how the figure is so realistic, that they were convinced it was something that came along with the collector’s edition of the game.

Looking into the channel a bit more reveals that this is the third such statue that Mr. Hary101 has created on his channel. The other two are Super Saiyan Blue Son Goku and a Leshen from TheWitcher 3: Wild Hunt.

Darksiders III is set to release on Nov. 27, 2018, for Microsoft Windows, PlayStation 4 and Xbox One. For more information, including our official review, be sure to check back to the site for updates and helpful guides.