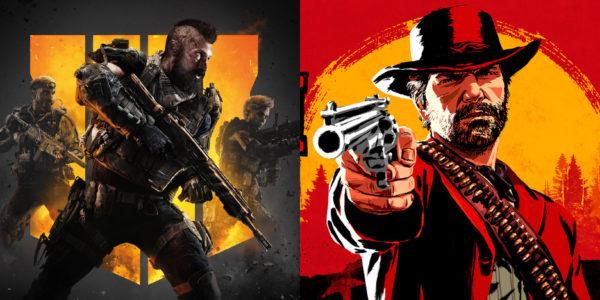 The latest report from intelligence firm Superdata provides an overview of the digital video game market in October, and the numbers are impressive. Call of Duty: Black Ops 4 Red Dead Redemption 2 helped drive consumers to exceed $1 billion spending on games for the first time ever.

Rockstar Games’ latest title smashed through four million digital copies sold in less than a week, but it was Call of Duty: Black Ops 4 that set a new benchmark for digital sales with an estimated 4.2 million sold over for the month.

Notably, and likely as a result of interest in Red Dead Redemption 2, Grand Theft Auto V returned its lowest monthly revenue in two years. October marked a double-digit decline both month-over-month and year-over-year.

Other key takeaways include Fortnite’s x20 higher revenue than this time last year, which represents an upturn after two consecutive months of sequential declines.

Elsewhere, Overwatch’s poor run of form continues with October the latest in five consecutive months of year-over-year declines for the game, despite an increase in microtransaction spending over Halloween.

Yesterday, the NPD reported that combined physical and retail sales in the USA also saw Black Ops 4 and Red Dead Redemption 2 take the first and second spot for the best-selling software of the month. You can read our full breakdown of the NPD report for more details.