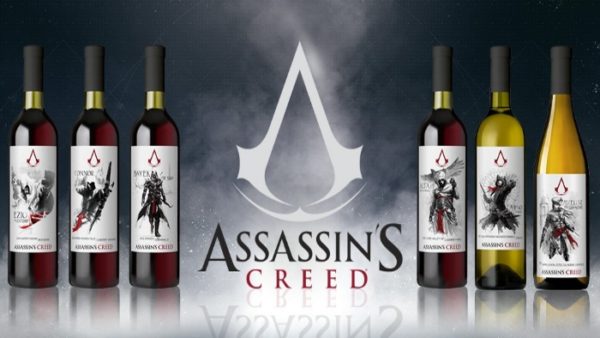 The 11-year-old Assassin’s Creed franchise receives its own line of wine available today, featuring bottles based on characters in the series.

According to a press release, the official collection was made in collaboration with Assassin’s Creed publisher Ubisoft and winemaker Lot18. The wine shop is also responsible for other entertainment franchise-themed wines including The Walking Dead, Saturday Night Live, and The Bachelor.

The collection contains six bottles each created in the likeness of an Assassin’s Creed character and can be purchased individually, half-case (six bottles), or full case (12 bottles) from the official Lot18 website. Check out below for the full list of wines and descriptions of most Assassin’s Creed heroes distilled into certain flavors.

2017 Aveline de Grandpré Appellation Côtes du Rhône Contrôlée
“Just as Aveline is the ultimate social chameleon, this French white blend is infinitely versatile, deftly tackling various food pairings and displaying different characteristics each time. The wine can be buoyant or rich, depending on the match — let it liberate your senses and challenge all that you know.”

2017 Arno Dorian Qualitätswein Niederösterreich Zweigelt
“Often misunderstood, Arno struggles with finding his way in the world, despite his pure intentions. Similarly, Zweigelt remains an obscure grape for many, but one sip will show you why it’s so popular in Austria. Vibrant flavors of plum, morello cherry and violet abound, revealing a romantic core that ultimately shines through.”

2017 Altaïr Ibn-La’ahad Loire Valley IGP Cabernet Franc
“Displaying impressive finesse and flavors of red currant and savory herbs, this red is the embodiment of Altaïr. The Cabernet Franc grape tends to mature quickly, just as Altaïr became the youngest to obtain the rank of Master Assassin. Take a leap of faith with this dynamic wine and be reformed in your tastes forever.”

2015 Bayek of Siwa Spanish Tempranillo
“Only a variety as ancient as Tempranillo, thought to have given rise to Spanish wine as we know it today, could represent the character of Bayek, whose tenets for the Hidden Ones organization are the basis for the Assassin’s Creed. Here’s a ripe, full-bodied and remarkable example that’s as special as an Apple of Eden.”

2016 Connor Horse Heaven Hills Cabernet Sauvignon
“Sometimes the most intriguing creations are born from forging the old and the new. Such is the case with this New World take on Cabernet Sauvignon and namesake for the complicated character of Ratonhnhake:ton, aka Connor. Extremely complex, yet pleasing and balanced, this is a wine that has something for everyone.”

2015 Ezio Auditore Super Tuscan Red Blend
“Sourced from Ezio’s birthplace of Tuscany, this red is charming and charismatic, like the Renaissance hero himself, displaying flavors of cherry and red plum on the palate. It’s an enchanting Super Tuscan that will make you believe in the enlightened perfection that the Assassins know humans are capable of achieving.”