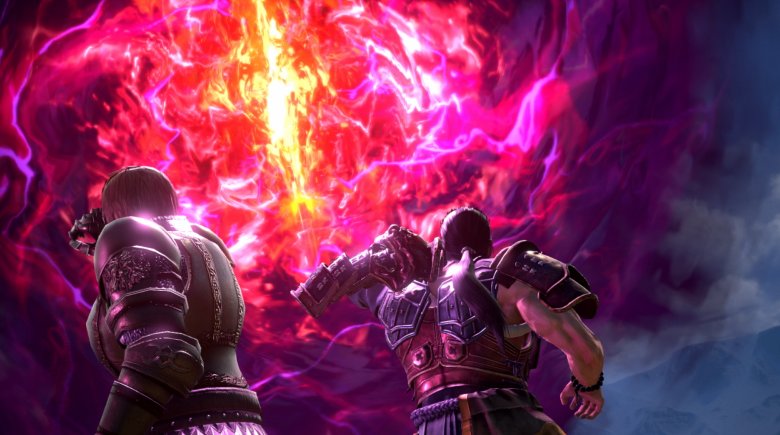 A strong cast of characters has always been one of SoulCalibur’s greatest strengths, ever since the release of Soul Edge in arcades and on PS1 in the 90s. The series has featured a number of story modes over the years, but like most fighting games they haven’t really been anything to write home about.

That’s exactly what left me so surprised when I started playing SoulCalibur VI and found a wealth of story content to dig into, most of which was actually pretty engaging. It’s easily the best story SoulCalibur has ever had, and some of the best fighting game story content I’ve seen in a long while.

The story content in SoulCalibur VI is broken up into two different modes, Libra of Souls and Soul Chronicle. The shorter of the two, Soul Chronicle, more closely matches your typical fighting game story. There’s an overarching storyline to play through, as well as a story for each and every character in the game. These stories comprise of different episodes that play out through voiced art scenes and character portraits, as well as fights.

The character stories are short, roughly 20-30 minutes, each but some of them provide fun character development or moments. On the other hand, the art and music are phenomenal, and the presentation goes a long way to draw you into each of the stories. While Soul Chronicle is fun, it’s really the other mode that lifts SoulCalibur VI’s single player up.

Libra of Souls has you creating your own character, then using them to explore the world of SoulCalibur. The entire mode plays out on a world map of Europe, Asia, and Africa and you advance through different areas as icons with main missions pop up. As you make your way through the main story, a ton of different side quests and optional fights pop up for you to take on. However, there’s a catch with this. In order to reach some of the side missions, you’ll need to go on an “Expedition.” This requires you to spend gold to travel across an area, and there’s a chance a random enemy will stop you for a fight, just like random encounters would function in an RPG.

During all of Libra of Souls, you’re collecting different weapons with stats, making some light moral choices, and obtaining food that you can use before a battle to boost a certain stat. At the same time, most of the battles in the mode try and implement unique rulesets or conditions, like making the floor slippery so you slide, or making it so that only attacks after Reversal Edges do full damage.

Libra of Souls actually works incredibly well as an introduction to the systems and mechanics of SoulCalibur VI, whether you’re a returning fan looking to get a refresher, or a brand new one. The ability to use every weapon essentially lets you test out every character and learn their movesets, and the different restrictions that battles layer on encourage you to try out new moves or playstyles. In turn, this leads to you learning more about how each character works, and which moves of theirs are strongest.

Luckily, Libra of Souls also has pretty accessible difficulty scaling. For the first few chapters, the mode isn’t overly challenging, and the main story, in general, isn’t too difficult. However, any fans who want a challenge will have some absurdly hard battles introduced with side quests later on.

While the systems and mechanics of the mode are engaging on their own, the other thing that surprised me is just how strong the writing is. The entire story is told through text boxes and non-voiced dialogue, outside of a few impressive cutscenes that highlight big moments. There’s a ton of lore and story crammed into the mode, more than any other SoulCalibur. Your character will run into the iconic characters from SoulCalibur VI, and they all tie into the overall narrative in some way.

Many of the side quests actually have plotlines that run through the entire mode, with characters that will repeatedly pop up over multiple quests. While short, many of these stories are heartfelt or charming, like the one about searching for exotic food to bring a rich lord’s daughter back to full health, or the happy-go-lucky merchant you continuously have to save from trouble. They may not have been quite as good in quality, but many of the little vignettes in Libra of Souls reminded me of the fantastic dream stories in Lost Odyssey.

Interestingly, as you advance through Libra of Souls, you’ll also unlock “Hidden Records.” These little icons are added to the different character timelines of Soul Chronicles, showing what your created character was doing at certain points. The way these two story modes weave together tells a detailed narrative, and while it’s not near something like a JRPG, it’s still quite a feat for a fighting game.

The two modes help realize SoulCalibur’s world better than ever before, giving lorehounds and longtime fans plenty of content to dig into, despite technically being a reboot of the story. Twenty hours into Libra Souls, I was still fully engaged with the story, and eager to see where it went. While the Soul Chronicles stories can be a bit of a mixed bag, I did enjoy most of them and particularly liked seeing how each character fit into the larger narrative.

Considering how disappointing the story aspects of SoulCalibur V were, SoulCalibur VI’s efforts are a more than welcome addition. Of course, there’s still all the multiplayer options and other modes you could want, but a fighting game providing such well thought out story content is a great thing to see these days.

All of this combines to make SoulCalibur VI one of the most robust packages we’ve ever seen from the series. I’d love to see more fighting games take cues from it, not necessarily doing the same thing, but providing the depth and content that SoulCalibur VI’s story modes do. I certainly didn’t expect to go into SoulCalibur VI and find that the story mode was my favorite part.

For even more on SoulCalibur VI, you can see our thoughts on why Geralt from The Witcher is the best guest character in the series yet. Also, be sure to also check out our ranking of the series, which includes SoulCalibur VI.