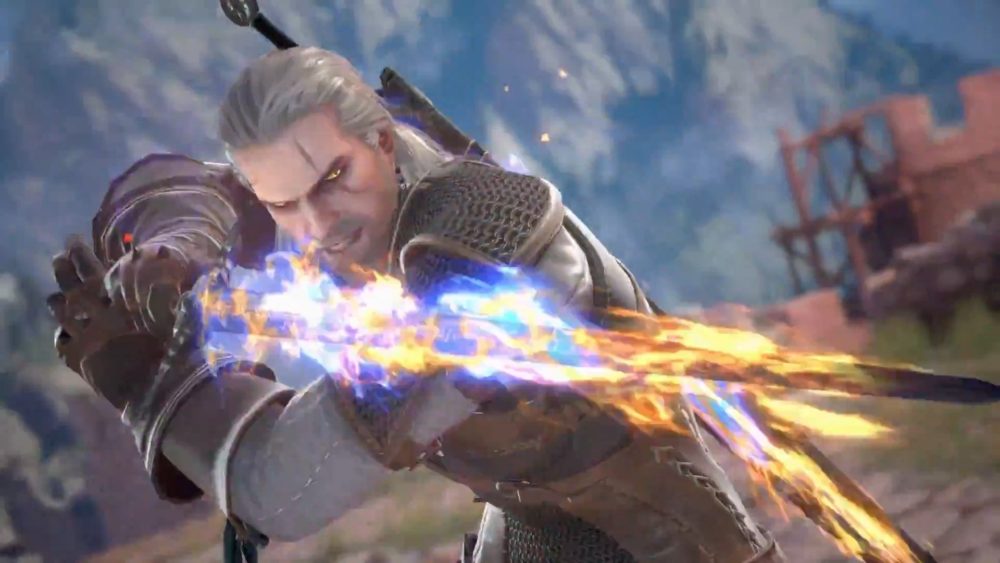 Geralt is SoulCalibur’s best guest outside of just being fun to play, although he definitely is. He’s also the character that just makes the most sense thematically. Geralt fits right in with the rest of the cast visually, as the medieval-inspired design of The Witcher overlaps fairly well with the 1500s period that SoulCalibur takes place in.

The series has definitely had some surprising guests before, chief of which was from Star Wars. While it was definitely fun to beat up Nightmare as Yoda and Darth Vader, there wasn’t much of a reason for those characters to be there, and something just felt off. Within the world of The Witcher, there’s a reason for Geralt to travel to other worlds, and SoulCalibur VI embraces that. Geralt’s story section in the game starts with him being transported through a portal to the world of SoulCalibur, something that he complains about quite a bit, as his hate of portals is well known.

SoulCalibur VI treats Geralt’s story almost as a fun side adventure for the Witcher, with Geralt once again being annoyed that he has to deal with something he doesn’t want to. There’s a fun rivalry that’s started between Mitsurugi and Geralt, as Mitsurugi is ultimately focused on finding the strongest opponents he can, he becomes obsessed with tracking the Witcher down. While he isn’t integral to the main story, SoulCalibur VI does a better job of weaving Geralt into the story than any past entry has done with their characters. A side quest even has a fun little nod to Gwent, with Geralt easily beating a group of characters in a card game.

Of course, weaving Geralt into the game applies to more than just the story, but the gameplay as well. The Witcher’s moveset feels like it’s lifted directly from The Witcher 3, with animations and abilities that look exactly like they do in CD Projekt’s game. Bandai Namco has done a fantastic job of translating everything from the Witcher. Geralt’s forward kick is a kick he does in the game, his sword attacks look exactly like the flourishes and spins he does in The Witcher, and his Soul Charge even has him downing a Tawny Owl potion.

Smartly, Geralt’s Witcher Signs use their own kind of mini-system in the game. You have access to all of his Signs as special attacks, from Axii to Yrden and they each function differently. Axii shoots out a short-range blast that staggers enemies, Igni shoots a stream of fire directly in front of Geralt, Yrden is a Guard Impact that stuns enemies, and Quen sends Geralt rushing forward with a barrier to deliver a powerful blow.

The Witcher Signs use up portions of your Soul Gauge whenever you use them, creating a kind of risk-reward system that encourages gauge management, just like The Witcher 3. His Soul Charge also lets you use multiple Signs for a limited time and causes Geralt’s eyes to dilate and grow even more catlike.

Because all of Geralt’s moves so closely resemble what they do in The Witcher, it’s easier for fans of that game to come in and play as Geralt. There’s still a good amount of learning to do, but you’re immediately familiar with how Geralt’s abilities function and what their uses are. SoulCalibur has done this in the past, of course, particularly with Link, but Geralt’s the best example yet at adapting combat from another game into the SoulCalibur experience.

Bandai Namco has been on a hot run with guest characters lately, doing a good job with Noctis in Tekken 7 and now Geralt in SoulCalibur VI. The inclusion of Geralt is the perfect example of how you adapt another series into your own and use it in fun ways, both in terms of gameplay and story. Hopefully, for the future of SoulCalibur Bandai Namco looks as Geralt as an example, and tries to work in characters whose movesets and reasoning just make sense within the world.