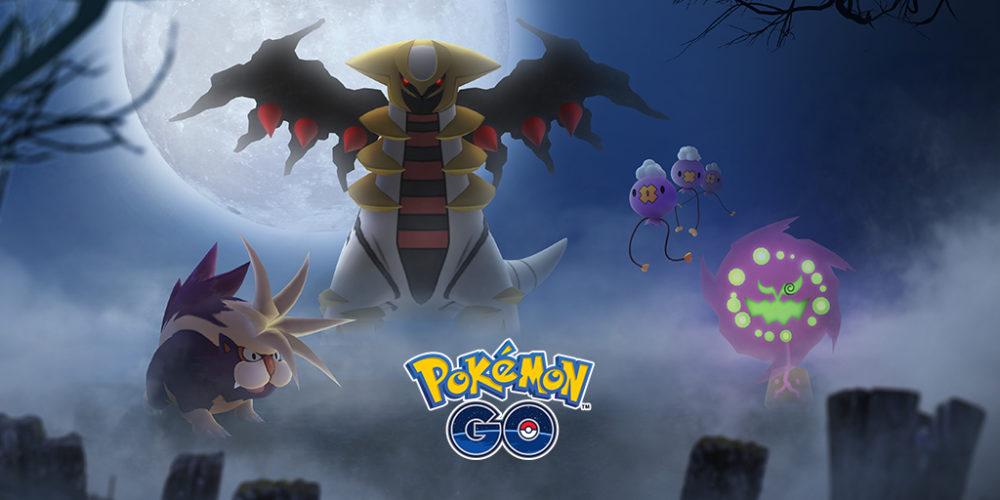 “When the crypt doors creak and the Spiritombs quake, spooks come out for a singing wake. Happy Haunters materialize and begin to vocalize, grim grinning Ghost-types come out to socialize.” (With apologies to Disney and Buddy Baker).

It’s that time of year again. As the leaves start to fall and people decorate their houses with ghoulish decorations, Niantic is on hand to provide Pokemon Trainers with a Pokemon GO Halloween Event. And, since we are in the midst of a slew of Sinnoh region sightings, you can bet all your candy corn we’re going get more than our fair share of new Ghost and Dark-type Pokemon.

Starting today, players can catch Pokemon such as Drifloon and Stunky (and their evolutions, Drifblim and Skuntank), and if the announcement’s picture is any indication, Spiritomb will also join the festivities. Oh, and the Poke-devil himself, the Ghost/Dragon king of antimatter and the Distortion World, Giratina. You can expect this legendary draconic centipede to barge its way into raid battles. Sadly, we don’t know if Sinnoh’s other Ghost and Dark-types (Mismagius, Honchkrow, Dusknoir, Rotom, Weavile, and Froslass) will be available. Still, players should stock up on Candies just to be on the safe side, which should be easy since the Halloween Event will double the amount of Candies earned.

But the hauntings don’t end with a bunch of new Pokemon. Professor Willow will also recruit Trainers to help deal with an “odd stone” that might be responsible for some paranormal issues. Players can participate in limited-time Special Research tasks that might let them snag this unknown poltergeist Pokemon. Plus, Pokemon GO will feature new Field Research tasks that revolve around Ghost and Dark-types. Oh, and the Style Shop will feature some spooktacular new threads, including a Drifloon Cap and a Gengar Backpack.

The Pokemon GO Halloween Event will run until November 1st, but Giratina will stick around until November 20th. So grab some extra Pokeballs and lace up your sneakers; these new Pokemon aren’t going to catch themselves.