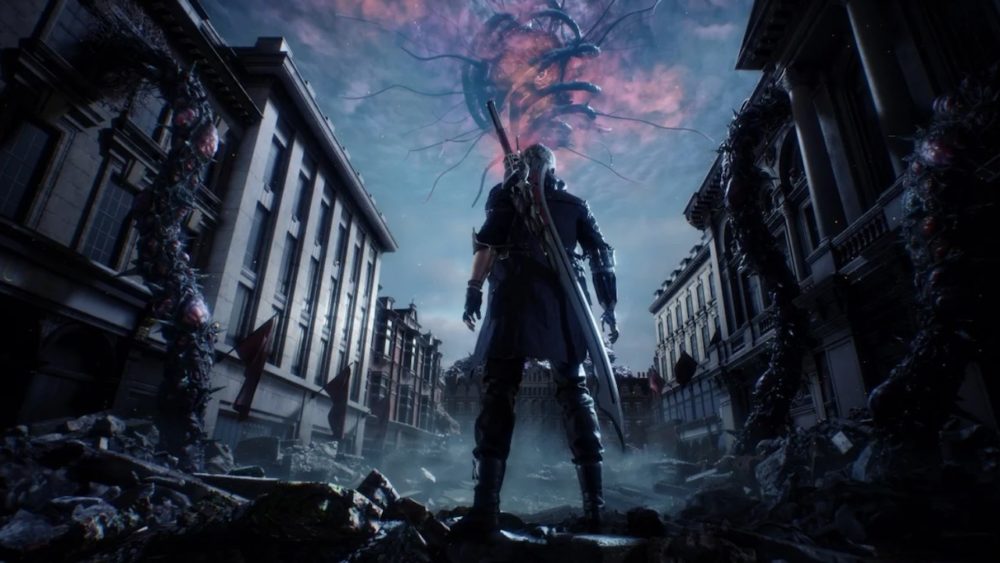 Half of the Devil May Cry franchise’s appeal is its collectible, creative demonic weapons. The other half is the ability to plow through armies of demons with those weapons. Longtime fans will be pleased to hear Devil May Cry 5 will feature plenty of returning fan favorite weapons and a few new ones.

Today’s Devil May Cry 5 panel was bursting with delicious information on the upcoming game. Devil May Cry 5 will feature plenty of extra goodies, including alternate outfits for each character —but you couldn’t care less about that. No, you’re here to see Dante and Nero’s latest tools of destruction.

Obviously, Dante’s iconic sword Rebellion and his trusty handguns Ebony and Ivory will return in Devil May Cry 5. While Rebellion will remain the same oversized sword gamers know and love, Capcom has tweaked Ebony and Ivory a bit. This time around, one gun will hit faster and the other will hit harder, but players might only notice this difference while using Dante’s Gunslinger Style.

Speaking of returning weapons, Dante’s reliable demon-perforating shotgun Coyote A will make a comeback, as will the rocket launcher Kalina Ann. Kinda. Actually, the weapon’s successor, Kalina Ann 2, will make an explosive first impression in Devil May Cry 5 thanks to a multishot ability that will spam all the rockets at enemies.

Not to be outdone by ranged weapons, the demonic sword Sparda will also reappear in Devil May Cry 5 to puree demons.  Moreover, the frost-spewing triple nunchaku Cerberus will finally return to Dante’s roster, and this old three-headed dog has learned some new tricks. This time, Cerberus will turn into a flaming bo staff and an electric chain staff, all while Dante channels his inner Bruce Lee.

Of course, that just covers the returning classics. Don’t worry, though; Dante will have plenty of new toys in Devil May Cry 5. You probably already know about his transforming motorcycle, Cavaliere, but he’ll also have some demonic boxing gloves/shoes and a fancy hat to go with them. The armored gloves/boots Balrog will combine the fighting prowess of Mohammad Ali with the power of a flaming Shoryuken. Meanwhile, the hat, made out of the hide of a Faust demon and fittingly named Faust Hat, will inject the game with some risk vs. reward. It will shoot Red Orbs like bullets but can also latch onto enemies to farm orbs as well.

While Nero won’t have any stylish new weapons (that we know of), he will have plenty of Devil Breaker arms to replace his lopped-off Devil Bringer arm. Capcom didn’t reveal any new arms during the panel, but it assures us the special Devil Breaker arms (and special version of Cavaliere) that come with the Deluxe Edition will be perfectly balanced and not overpowered. Take the Sweet Surrender, for example. It is basically a vibrating massage arm. All it’s good for is slowly restoring health during combat and not tossing demons around. Plus, the arm will break if an enemy hits the player while in use. Completely balanced.

Devil May Cry 5 will release on March 8th, 2019 for the PC, Xbox One, and PlayStation 4. That should give gamers enough time to wait on pins and needles for these sweet weapons. And if that’s not enough, players will be able to take pictures of the weapons in action with the game’s new Photo Mode.