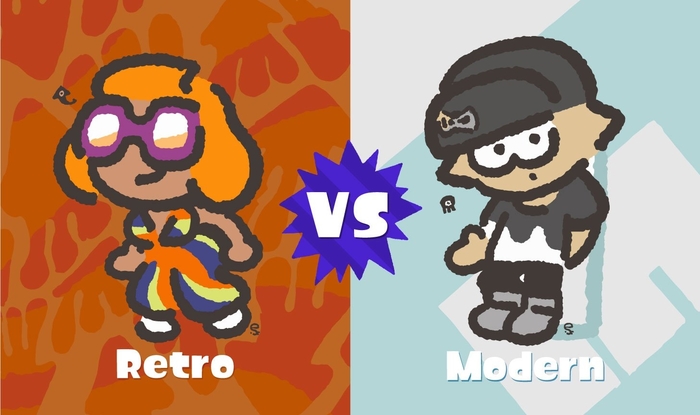 Nintendo has announced the two sides that you’ll be able to choose from in the next Splatfest for Splatoon 2. The Splatfest takes place over a 24-hour period starting on Friday night (Sep 21) at 9 p.m. PT. This time around, retro and modern are up against one another in a battle that will be remembered until the end of time. Are you a fan of overalls, neon colors, and cassette tapes? Or are you all in with the modern style that is full of joggers, bomber jackets, and iPhones? Let us know which side you’re planning picking in the comments section below.

Remember that this is a special Splatfest because it’s the first to feature the newly updated rules that Nintendo announced just earlier this week. One of the biggest improvements worth mentioning is that now you can participate in the Splatfest with your friends even if you don’t have a party of four people. According to Nintendo, If you join a match as a group of two or three, random solo players will be matched up to make a group of four.

Keep in mind that the paid online service for the Nintendo Switch rolls out on Sep 18, so in order for you to participate in this heated Splatfest, you’re gonna have to cough up some bucks to the big N. For just $19.99, you can subscribe for one entire year of the service, which allows you to play Switch games online, have access to a slew of classic NES games, and special discounts.