Eagle-eyed fans have spotted another reference to the greater Marvel universe in the newest Spider-Man for PlayStation 4 trailer. The trailer showcases Insomniac’s sprawling New York City that players will be swinging around in on September 7th. At roughly the 40 second mark, viewers can see Spider-Man flying past a mansion with a unique windowpane.

The image, posted by Reddit user Trick502, shares a striking resemblance to the Sanctum Santorum, the abode of the mystical Dr. Stephen Strange, Sorcerer Supreme. Specifically, the red window in the above image contains very similar line work to the Eye of Agamotto, which contains an Infinity Stone which is protected by Dr. Strange and the order of the Ancient One. 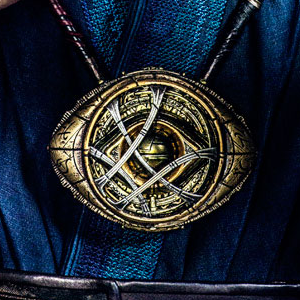 Immediately after the scene with the Sanctum Santorum, viewers can catch Spidey free-falling by Avengers Tower, a locale that we knew would appear in the game. The inclusion of Dr. Strange’s headquarters implies that the inclusion of Avengers Tower is not an anomaly, but that Insomniac’s Spider-Man will take place in a larger Marvel universe, similar to the MCU.

It is unclear if Dr. Strange, or any other Avenger for that matter, will appear in the game. Outside of the notable buildings, there have been no other signs of Marvel characters outside of the Spider-verse. Previews have charted out the first four hours of the game and there has been no shred of information regarding the Avengers, but there have been details that previewers were unable to discuss, so who knows what those details could be hiding.

Could these nods imply that Insomniac’s Spider-Man game is the beginning of a Marvel Gaming Universe? If so, what other Avenger would you like to see get their own game? Sound off in the comments below.