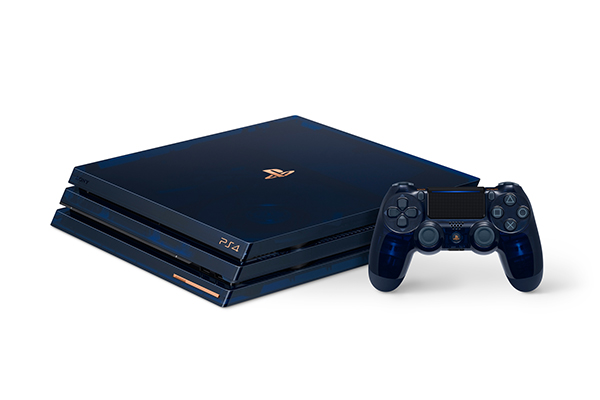 Sony has revealed that the PS4’s impressive 81.2 million units sold have pushed the company past a staggering 500 million lifetime consoles sales, and they’re celebrating in style with a limited edition PS4 Pro.

Subtly named the “PlayStation 4 PRO 500 Million Limited Edition,” the dark blue console has a translucent effect with a special copper PlayStation emblem and a plate on the front of the console showcasing a unique serial number. There’s also a matching limited edition Dualshock 4 wireless controller that comes with it, as well as a headset which can be purchased separately. You can watch a video montage introducing the new hardware here.

Check out the pictures below:

“I would like to express my deepest gratitude for the continued support from our fans and business partners, who have all contributed to PlayStation’s rich history. Without our passionate community, we would not have been able to surpass this remarkable milestone of 500 million units.

The PlayStation4 Pro 500 Million Limited Edition has been created to represent our appreciation to our loyal fans. We will continue to make PlayStation the best place to play for all, as does our continued commitment to expanding our library of great games and variety of network services.”

Notably, Sony’s previous financial report stated the PS4 had shipped 82.2 million units at the end of last month. The 81.2 million sold to consumers confirms the number of actual units sold wasn’t far behind.