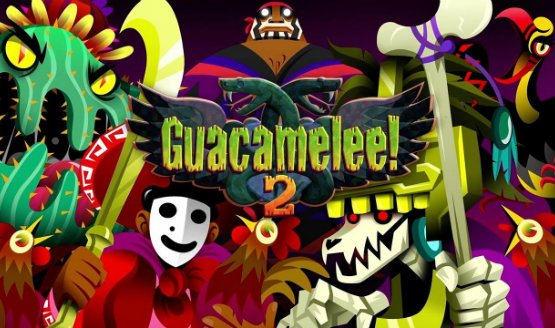 The appeal of the first Guacamelee was how it combined familiar Metroidvania structure with a unique style and extremely engaging combat. Drinkbox’s sequel doubles down on that with a even crazier story and a longer journey, but it often feels too familiar when it comes to gameplay.

You once again play as Juan, who is asked to leave his quiet family life to don the Luchador mask one more time and cross timelines and stop Salvador from stealing the Sacred Guacamole. Salvador is a key character in the Darkest Timeline’s version of Guacamelee 1’s story, and the Sacred Guacamole has the power to cure him from sickness and give him the power he once possessed.

None of the personality and style that the first game had has been lost. Many of the characters return, from the one-time-foe Flameface, to the Uay Chivos who teach Juan their wise, goat-man ways. It’s delightfully silly, with one liners and cringe-worthy dad jokes being thrown out every few minutes, but it’s remarkably consistent in how well that tone works. Juan may be a silent protagonist, but there’s more than enough personality elsewhere to keep the story engaging. The personality is even evident in the dialogue and art-style, just as it was in the first game. Guacamelee 2 is extremely colorful, no matter which timeline Juan is in. Bright pinks, yellows, and greens bathe most of the areas and there has been a clear upgrade over the first game in the detail of the backgrounds and is quite beautiful at times.

That fun personality is important, too, because Guacamelee 2 is more story focused than its predecessor. It plays out as a pursuit movie, essentially, with Juan chasing Salvador across the Mexiverse, coming face to face with his henchmen and swapping between the living and dead worlds along the way.

Whether it be the introduction of characters or items that are pertinent to the story, the gaining of skills, or the reappearance of older characters, story moments happen regularly, giving a real pace to the game. There’s always something just around the corner. Throughout, you’ll be wanting to beat the room full of enemies or pass the platforming sections to see the story continue, and that keeps the journey compelling.

That does stop you from enjoying Guacamelee 2’s metroidvania structure, somewhat. The story encourages you to keep going rather than backtrack. As Juan unlocks more skills, more areas are open to be explored, but I saw myself more inclined to stick with the story and rapid progression than to test myself with a side-quest or platforming challenge room.

If you do choose to explore, however, you’ll find a map that very well designed. Almost every room feels like a step forward, with new enemy shield mechanics and platforming obstacles, among other things, being introduced frequently, keeping you on your toes and challenging you at the right times. But there are also pathways blocked by skill requirements that make backtracking easy. You might spend an hour making your way through an area, only to learn a new skill that makes returning to where you came from possible in a matter of seconds. It’s easy to see how meticulously put together Guacamelee 2’s world is.

Gameplay wise, Guacamelee 2 is familiar, and still very deep. At times, Juan can feel immensely powerful, uppercutting and head-butting through enemies at will. With many of the areas and combat scenarios being focused on the use of recently earned moves and skills, the action is kept varied, and the shields and platforms used in later areas prompt you to experiment with combos, adding a huge amount of depth to the combat. Juan can have about eight core combat moves at his disposal at any one time, and much of the challenge comes from working out which is most effective against each enemy. Most of the foes from the first game return, alongside some new ones, so most areas will see you face different ones room to room, forcing you to analyze enemies before you attack.

Additional combat depth is also added by the game’s increased use of Juan’s chicken form. Now with two combat moves of his own, the chicken Juan is a real option in combat, and it’s even incorporated more than before into boss fights and platforming, seeing you switch between Juan’s forms on the fly (literally). It makes some sections more complex than ever before. The upgrade tree also adds additional combat opportunities, such as four extra grapple throws and the ability to use special moves without using stamina after hitting a certain combo number.

On the whole, though, Guacamelee 2 is easier than the first game, especially when it comes to the boss fights. While there are plenty of moves for you to get used to, and ways that Drinkbox made the gameplay more complex, many of the enemies are too weak or too easy to counter. That may be partly down to Guacamelee 2’s biggest flaw. Aside from the expanded chicken powers and occasional platforming flair, there’s very little difference between the sequel and the first game when it comes to gameplay.

While Juan is ostensibly returning to his Luchador ways, Guacamelee 2 sees him start from the same point. As you chase down Salvador and his gang of Lieutenants, Juan has to learn the same moves as he did in the first game, in the same order, at the same intervals in the game. Rather than starting where he left off, allowing for more variety from the start, each area is very predictable if you’ve played the first game. Areas are designed around particular moves, just as they were in the first game, but they’re not ideas that need extended introduction for seasoned Guacamelee players. If you played the first game, Guacamelee 2 will often feel like the first game with a new story. There are a couple of new features, and the returning moves still feel excellent to execute, but the way they’re introduced feels all too familiar.

Where Guacamelee 2 does differ from the first, however, is in length. One of the biggest complaints about Juan’s first adventure was that it could be finished in less that six hours. On Normal, with only a little backtracking, the quest to stop Salvador took about nine hours, and that’s with it feeling like an easier game. The added length gives Drinkbox the opportunity to be more ambitious with the platforming sections and add twists and turns to the story, which are certainly welcome.

The structure of Juan’s journey may feel overly familiar to anyone that played Drinkbox’s first game, but Guacamelee 2 doubles down on the style, personality, and gameplay that made it such a joy to play. The adventure is full of silly jokes and unique characters, it’s a much longer experience, and the combat is deep and engaging enough that it’s possible to look past the fact that you’ve seen most of it before.