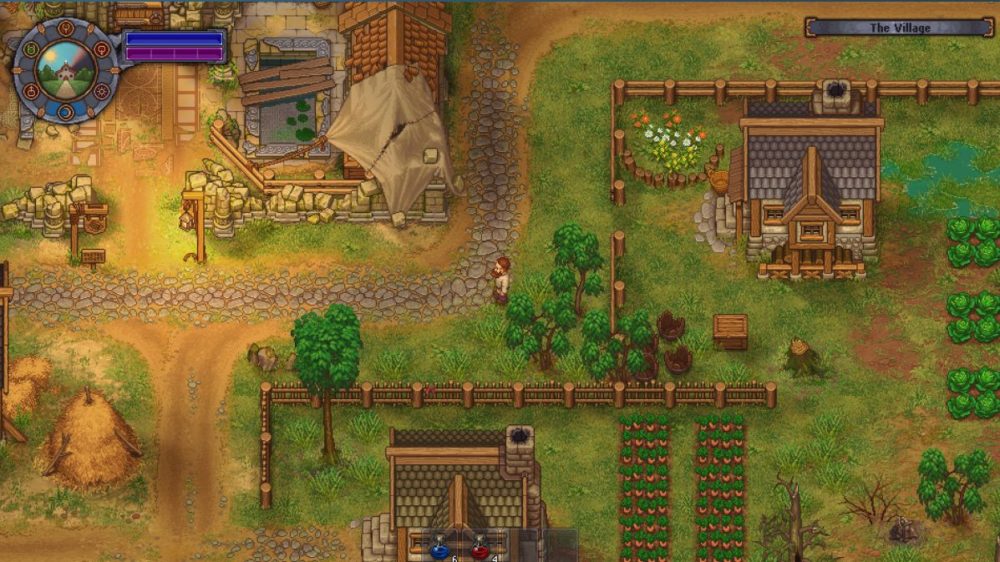 Graveyard Keeper is a whole new take on the genre that’s been trail blazed by Harvest Moon, Stardew Valley, and Story of Seasons. They’re the top dogs right now, so who does this newcomer think it is? Can it stand toe to toe with those champions? Let’s dive into the nitty gritty of this charming, yet frustrating, game.

While usually you’d be playing a nice, quaint farmer that somehow, some way has managed to get their hands on a whole estate with a ton of land, Graveyard Keeper takes a way grimmer approach: you got run over and now you’re the keeper of a graveyard, a morgue, a church, and a modest farmland. You have absolutely no idea what the heck is going on, and you’re in a strange land now. Good luck!

Don’t think this is a super dark game, though. It’s too charming for its own good. Even when you’re extracting skulls and intestines in the morgue or exhuming bodies in the graveyard, there’s something cute about it all. The gorgeous little pixels, the dialogue between characters, it’s all cute. I mean, there’s a talking donkey that’s obsessed with capitalism, for crying out loud. There’s also an alcoholic, talking skull. That’s right; there are two anthropomorphic characters.

Most of what you’ll be doing in Graveyard Keeper is leveling up in order to craft more and more which in turn makes the land you own better. You’re always going to want to build a new desk or tool or gravestone. The leveling system is pretty robust for being such a small game, as you’ll have different trees that you can go through with points being your currency while leveling. These points are accumulated the more actions you do: red points for laborious actions (like mining, for example), green points for natural actions (like foraging, another example), and blue points for spiritual stuff (like when you’re studying a book).

You’re not only keeping track of a graveyard, as I mentioned before. You also have farmland where you can grow crops or other products. You have a morgue where you can take bodies and extract different organs from them to sell. You have a church where you can give sermons at. It’s really more a “Medieval Funeral Home” Keeper. Besides all that there’s even combat (though, admittedly, it doesn’t really matter much and seems tacked on), fishing, cooking, friendships, and all the usual stuff you’d expect from this kind of game. There’s quite a bit that you can do.

I spent a lot of time wondering why, then, as a huge fan of games like Graveyard Keeper, I found it to be overwhelmingly taxing after a certain point while playing. I think I can safely narrow it down to something as simple as the stamina within the game. The entire power that revolves around the whole game. What gives you the ability to actually do stuff. It also drains really fast. To the point where I was playing and wondering if Graveyard Keeper was at first developed to be an iOS game, aiming to charge players to regain their stamina meter.

While I thought it was a cool change from Stardew Valley and Harvest Moon to be able to sleep and wake up at any time of day (instead of the game automatically fast forwarding to the next morning once you do), I think that might be a huge flaw in itself. When you can sleep whenever, you can make stamina deplete really fast because who cares, right? You can just stop what you’re doing, head home, and sleep it off. But that gets old quick, and what at first seemed like a good revamp of an old formula quickly becomes something you resent as the reason the game’s annoying.

But that’s not all, folks!

Fetch quest after fetch quest isn’t such a big deal to me, though I’m aware it definitely is to a lot of players. I’m used to that sort of being the end game for most of the missions you’ll encounter in these types of games. What really put a damper on my experience with Graveyard Keeper, though, is that the map is so friggin’ big for your character. We all know that a bigger map doesn’t mean anything if you don’t fill it with meaningful things. Sure, there are townspeople —that you can’t talk to. Okay, there’s places to explore —with little reason to do so.

That they made it so big can be considered impressive if it didn’t mean you’re walking across it all repeatedly throughout your gameplay experience. Worse is when you’re actually on a timer to get some place that’s far away. Yes, that’s right, the day and time that you talk to the NPCs you can talk to matters. And this is important when you have to walk across the entire game map and it goes from being Monday to being Tuesday. Or if it goes from being morning to night, whatever. This happened to me too many times.

One time, I delivered something (which took me what felt like too much effort to get) for a quest, only to immediately get asked for something else. I’m telling you, though, it’s not even that it was fetch quest after fetch quest; it’s that I left the damn 5 Faith I needed in a trunk back at my house and now needed to walk all the way back. It’s one step away from being a walking sim.

I don’t want to make it seem like I absolutely abhorred my time with Graveyard Keeper. However, I feel I only didn’t absolutely hate it because I’m already a massive fan of the genre. I can’t in good conscience recommend it to you if you’re only looking for a new game. I can only recommend it if you’re looking for a new farming/harvesting simulator, specifically. And even then I want you to temper your expectations a bit, at that.