When people think of Soulsborne games, the first word that comes to mind is “hard.” Making their mark on the gaming landscape with a focus on precise and challenging gameplay, they’ve come to be known for their punishing enemies and, more notably, difficult bosses. Some are harder to topple than others however, and these bosses in particular are the hardest of the hard. These are the top 10 hardest Soulsborne bosses, all of them ranked from hard to hardest.

There’s no easy mode here, these will all give you some difficult trouble.

If you’re interested in seeing other rankings, here are the hardest Dark Souls III bosses and hardest Bloodborne bosses. 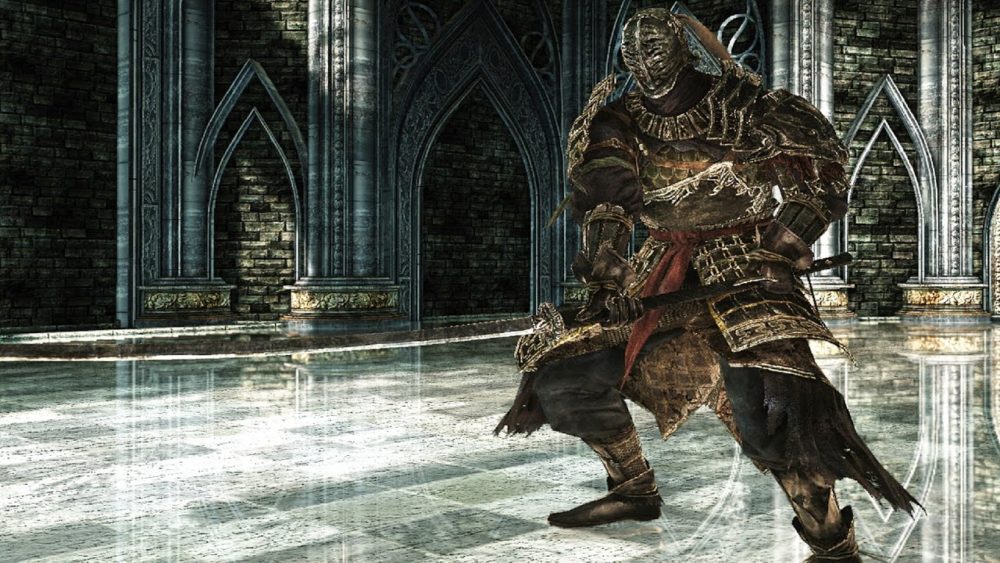 Say what you will about the second installment in the Souls series, but it can’t be denied that some of its bosses posed a legitimate threat to players. Case in point: Sir Alonne, the knight of the Old Iron King who resides within the King’s memory.

A wandering warrior from the east, he takes on his opponents with rapid, sweeping blows from a two-handed blade and is capable of parrying blows should player make a hasty attack.

As if that weren’t bad enough, players also have a time limit on how long they can fight him.

Should they take too long to defeat Alonne, they’ll be forced out of the King’s memory and have to start the battle from scratch, sans any consumable healing items they may have used in the process. 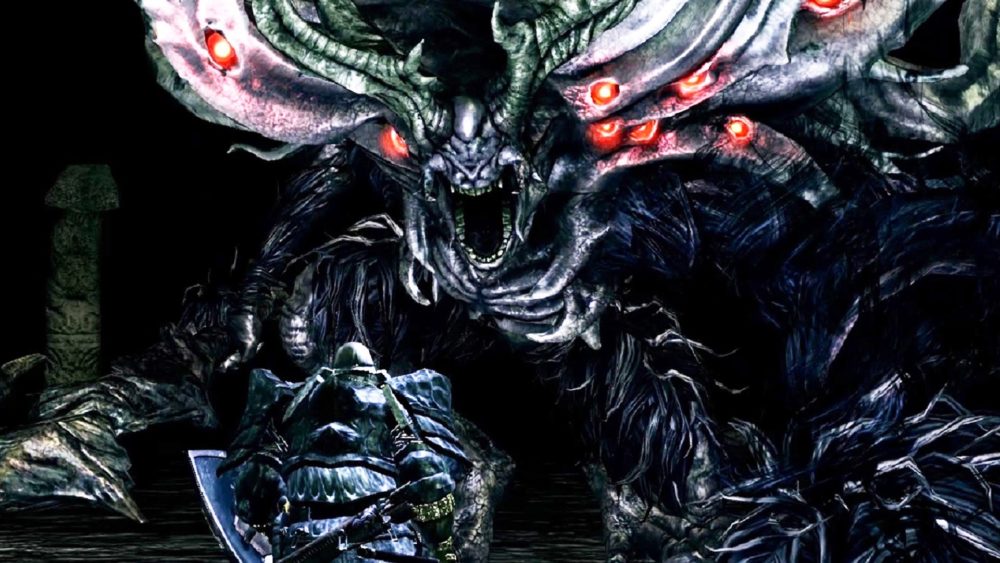 After making their way through the trials and tribulations of the game’s DLC, players of the original Dark Souls are faced with the creature responsible for the spread of darkness across the land Oolacile: Manus, a former human turned monstrous beast after his humanity ran wild.

Wielding dark magic that tests and corrupts all it touches, he can tear through most any armor the player equips and strike them from a variety of distances and areas.

Even if players manage to get close enough to him to cancel out these moves, he switches to crushing physical blows and swings, smearing players against the floor and walls in a matter of seconds.

Immortal chosen undead or not, it doesn’t get any less painful the more it happens, and it will. 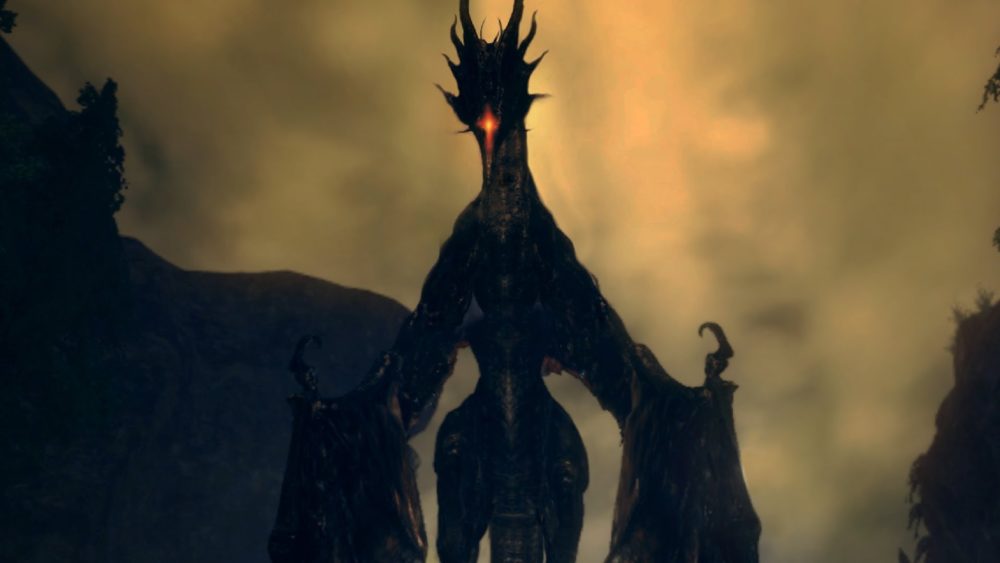 After slaying the dragon of the bridge and Seath the Scaleless, most players weren’t very threatened by the idea of a fight with another scaly beast in Dark Souls’ DLC area.

After a few decisively one sided encounters with the red-eyed Kalameet, however, their tunes would have changed.

Black as night, fast as the wind and spewing black fire breath across the battlefield, he’s impossible to so much as scratch until the giant knight Hawkeye Gough lends you a hand and snipes him out of the air, bringing him down to your level for a more personal sortie.

Even then though, his fangs, claws and tail can crush the player into a fine paste, requiring a finely honed patience and attention to detail of anyone looking to knock this devil off his perch. 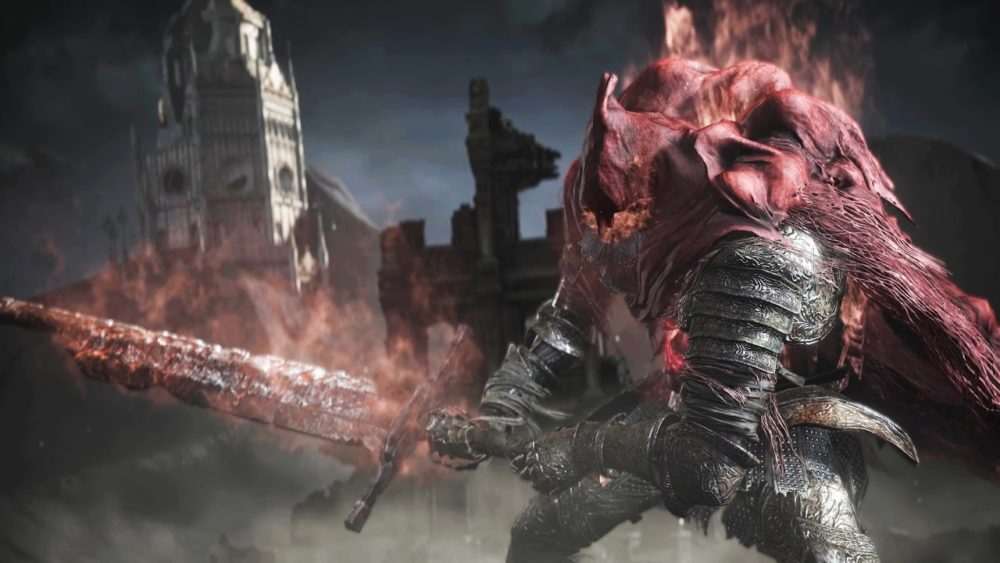 From the first time you meet the ragged warrior known as Gael, there’s something off about him. Clearly a bit mad and more than a little eager to send you into unknown dangers, he always seems to be planning something just beyond your comprehension.

This all comes into focus when players release the illusion cast on the ringed city and are greeted by Gael in earnest for the first time.

One of the oldest living men in the land, he has hunted countless undead for their dark souls to allow for the creation of a new painted world, and you’re his next target.

Capable of leaping across the battlefield in an instant, he unleashes flurries of crossbow bolts, sword strikes and waves of magic in quick succession, and only becomes more ferocious after players complete his first phase.

It’s fitting that such a challenge stands between the ashen one and the final dregs of a dying world, but that doesn’t make it any easier to surmount. 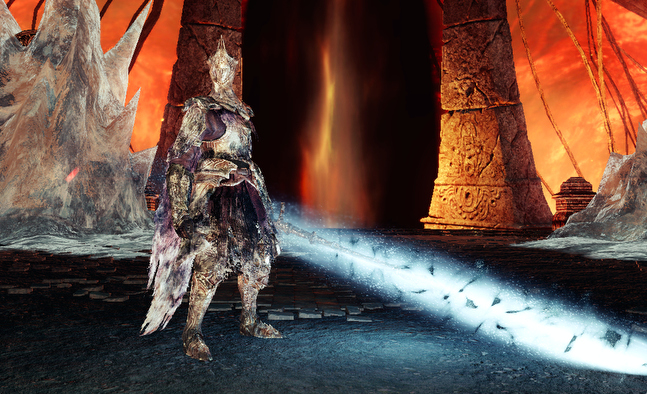 The tale of the Burnt Ivory King is a tragic one. After falling in love with one of the Daughters of Manus and faced with her loss to seal an encroaching darkness away from his land, he instead chose to spare her and face the darkness himself, holding it back for as long as his soul would hold out.

In the end, he fell, and the player is left to dispatch of him and his knights once and for all.

As one would expect, this is easier said than done. Not only do the King’s burnt knight’s pose a legitimate threat, but once they’ve been dispatched and sealed away, the King himself strikes fast and hard, driving his blade through the player with ease and obliterating their stamina with a few quick strikes otherwise.

This is only during the first phase; after taking a certain amount of damage, he ignites his blade and delves into the darkness that corrupted him, making for an even more frantic fight than players had already just barely survived.

It’s satisfying to finally put this once great ruler to rest, but damned if it doesn’t require an absurd amount of effort compared to most Soulsborne bosses. 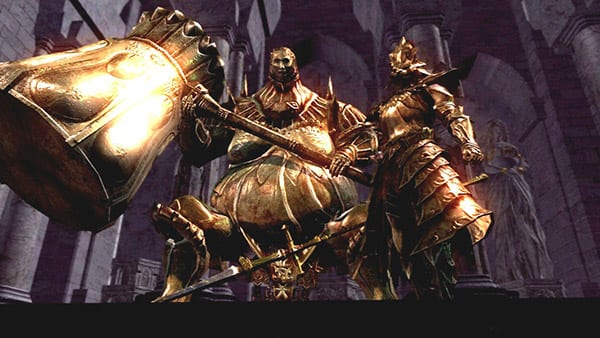 When players finally reached the boss area of Anor Londo, few could have been prepared for the destructive duo they’d encounter: Dragon Slayer Ornstein, a lightning-imbued spear wielder able to dart across the battlefield; and Executioner Smough, a behemoth monster of a man armed with a hammer nearly as large.

The two pincer the player with immediate and ceaseless aggression, forcing the chosen undead to strike when they can, and hope they haven’t lost sight of their enemy for too long.

Should they manage to fell one of these legendary killers however, things only get more insurmountable: the surviving knight will put their comrade out of their misery, gaining their power and a size boost as a result.

If players managed to save any of their estus flasks from the first round, it’ll be gone before they know it as their enemy set upon them with a renewed vigor and health bar. They are few Soulsborne tag teams as frightening as these two.

It’s understandable for there to be a wall of entry in any Soulsborne DLC, giving players a taste of what’s to come from the rest of their adventure, but the fallen hunter Ludwig acts more as a sheer cliff face ready to repel players back down into a bottomless pit of crushing despair.

A massive goliath of seething limbs and warped appendages, Ludwig barrels back and forth across the battlefield like a boss and grinds the player to a fine powder should they fail to dodge with pin-point accuracy.

When he’s not doing this, he’s leaping down from the ceiling to deliver an AOE attack or spewing ectoplasmic acid all around himself, melting down anyone unlucky enough to get caught in the crossfire.

Even if a hunter manages to deal enough damage to bring him down to half health, he starts to use his Holy Blade, swapping out his frantic movements for one hit kills and attacks that span half the battlefield.

It won’t matter what you face after taking down this supernatural disaster, there are few bosses that’ll ever give you a run for your money the way he has. 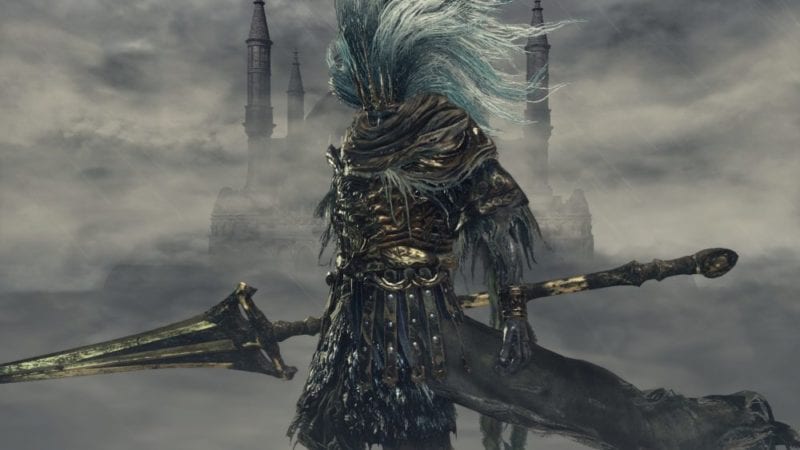 By the end of the Souls trilogy, few remain who have ties to the original lords of fire, and fewer still could hope to match their power.

Save for one: The Nameless King, the forgotten son of Gwynn and the only of his kin to side with the dragons in the war that gave birth to the world of undead.

Riding atop the King of Storm, a lightning drake capable of draining players to a sliver with his bolt-filled breathe, he strikes from afar with a blade of Sephirothic proportions until the player manages to fell his winged steed.

Should this happen, he’ll then take on the drake’s powers for his own, striking and launching the player with a flick of his blade. He is certainly among the hardest Soulsborne bosses you’ll ever face. 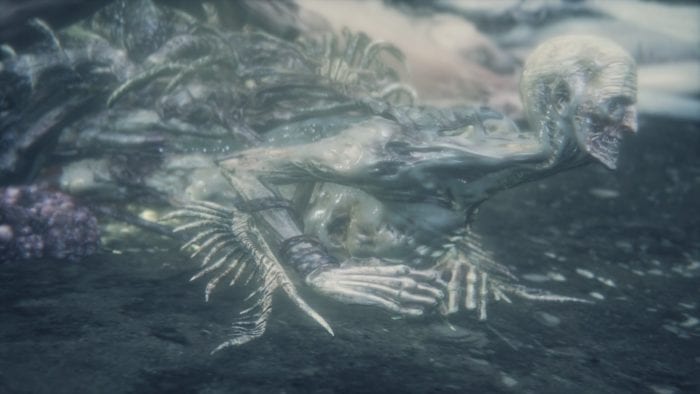 At the root of all the pain and suffering inflicted on those within the Hunter’s Dream is a being just as tormented and cursed: The Orphan of Kos, the child of the first great one to come into contact with mankind.

After mankind killed its parent, the child remained and anchored the ungodly powers needed to enact a curse upon them. It stands between the player and the end to the nightmare they seek, and it has no intention of going quietly.

While it may not appear very intimidating at first compared to some of the other terrifying Soulsborne bosses, the Orphan is built like a tank and hits like one too.

Even the strongest hunter can be torn to ribbons in a few strikes from its bladed appendage and its projectile attacks can disrupt the flow of battle at the drop of a hat.

And that’s just the first half of the battle; after it takes enough damage, the Orphan enters its true form, extending its melee combos while also unleashing AOE lightning attacks on top of occult shock waves.

Don’t be surprised if this boss takes you a few hours, or even a few days, to beat, which is probably par for the course for most of the Soulsborne bosses on this list. 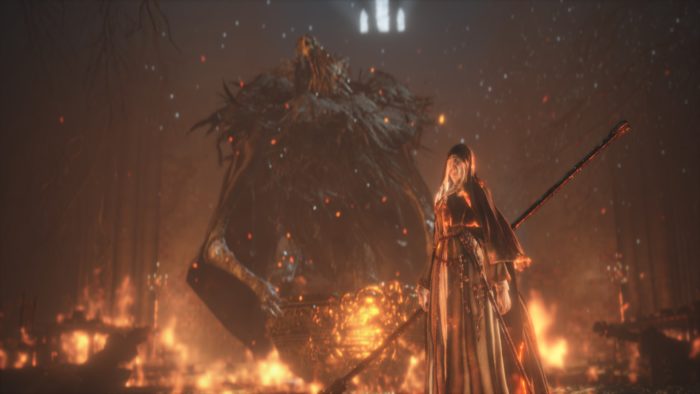 Screw. This. Boss. After a pretty breezy journey through the third game’s painted world, players are met by the scythe-wielding Sister Friede, daughter of Father Ariandel and a sentinel against any who would threaten the existence of their home.

Able to execute anime-esque attacks the player could never hope to pull off themselves, she strikes fast and hard, sometimes disappearing before she does to throw the ashen one off her scent.

Should players take her down, they’ll trigger Ariandel to enter the fray, resurrecting her before setting upon the ashen one with flame-spewing, ground-shaking blows from a cauldron.

And then, should players survive this assault and take both assailants down, Friede will rise once again with both her and Ariandel’s powers combined, rending through anything and everything with icy black flames.

It’s grueling, it’s difficult and it’ll wear your nerves down to frayed twine, but no one can say you haven’t overcome the worst the Soulsborne genre has to offer after you’ve beaten this boss fight.

That does it for our list of the hardest Soulsborne bosses! Which bosses drove you up a wall while playing through the Soulsborne games? Mention them in the comments below. For more on all things Soulsborne, check out our list of Soulsborne like games to keep an eye out for later this year.