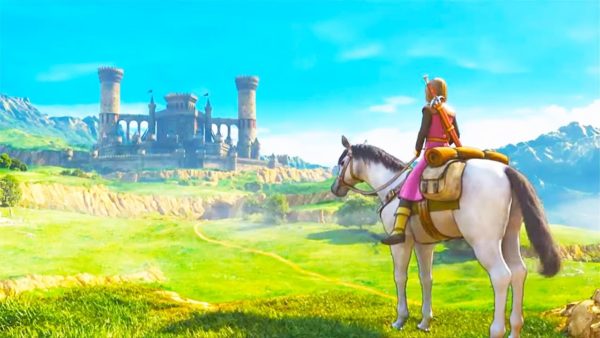 It’s been eight years since the release of a mainline Dragon Quest game in the west, with the last one being Dragon Quest IX on Nintendo DS in 2010. While Dragon Quest XI: Echoes of an Elusive Age sticks to its traditional JRPG roots, it presents a gorgeous world to explore, and a number of modern enhancements to help ease newcomers into the experience.

Dragon Quest XI puts you in the shoes of a young man from the village of Cobblestone, who finds out he’s the prophesied hero known as the Luminary, destined to destroy the Dark One and save the world. The game uses its tropey setup to weave in a few interesting twists, as well as fantastic self-contained stories about its fascinating cast of characters and towns. Combat is turn-based but there are options for having the AI control your party, and a new “Pep” system lets your characters enter a heightened state during battle, and pull off some devastating co-op moves.

We already loved pretty much everything about Dragon Quest XI, giving it the rare 5/5 score in our review and calling it a perfect JRPG for newcomers. If you’re looking for a lengthy experience with a focus on characters and storytelling, this is one to pick up this month.

Marvel’s Spider-Man surprised everyone when it was announced at E3 2016, helmed by none other than Insomniac Games, responsible for Ratchet & Clank and Sunset Overdrive. It’s been a long wait but now one of the biggest PS4 exclusive games of the year, if not the biggest, is here. Spider-Man tells a brand new story for the web-slinger, taking place years after Peter Parker has become Spider-Man. This means a Spidey who’s much more confident in his abilities, and settled into his role as both the hero, and his day job as Peter Parker.

Spider-Man gives you a ton of different combat abilities to make use of, like webbing up enemies, grabbing and throwing nearby objects, launching enemies into the air, and more. Of course, swinging around the city is just as much of a focus, and Spider-Man PS4 looks to nail that aspect, giving you a ton of different options for swinging, parkouring, and keeping your momentum at a breakneck pace.

We don’t know a ton about the main story, but it will have Spidey going up against a host of different villains. We already know the likes of Mr. Negative, Shocker, Kingpin, Scorpion, Vulture, and Rhino are in the game. It’s bound to be an action-packed experience, and one that Marvel fans won’t want to miss.

Shadow of the Tomb Raider

The rebooted Tomb Raider games have created a new vision for the series in recent years, and have been some of the best experiences the series has ever given us. Despite moving to a new developer, Eidos Montreal who developed Deus Ex: Human Revolution, Shadow of the Tomb Raider looks to once again deliver and expand on what the first two games did.

The game’s hub area of Paititi is the largest the series has ever seen, and you can take on sidequests and find secrets to learn more about Paititia and its inhabitants. One of the biggest changes is how swimming has been completely revised, allowing for some massive underwater exploration areas. At the same time, there’s a larger emphasis on stealth, allowing you to escape enemies after you’ve been spotted and go back to using stealth if you don’t want to go in guns blazing.

Shadow of the Tomb Raider takes place two months after Rise of the Tomb Raider, and it has Lara traveling to Latin America to search for a long-lost Mayan relic. Shadow promises to be the darkest of the rebooted trilogy yet, as Lara has to save the world from an impending apocalypse that was inadvertently set off during her expedition for the relic.

Valkyria Chronicles 4 follows the story of a young Federation commander named Claude Wallace and his squad, Squad E. In a last-ditch effort to capture the Imperial capital, the Federation executes Operation Northern Cross, which Claud and Squad E take part in.

Despite using the same formula for combat, Valkyria Chronicles 4 introduces a few updates and changes. A brand new character class known as the Grenadier can hit enemies from range, and a Stand Up feature will let units stand back up after being downed and continue the fight. If allied soldiers are around to give battlefield information, your units are also able to fire on the enemy forces without being seen. Valkyria Chronicles 4 looks to sport an incredibly emotional story, and the return to the form for the series is definitely a good thing.

Dontnod Entertainment burst onto the scene in 2015 with their acclaimed narrative series Life is Strange. Sporting fantastic characters, a gripping story, and great choice-based gameplay, Life is Strange interestingly iterated on the Telltale formula, and now three years later we’re finally getting a new proper entry in the series.

Life is Strange 2 tells a new story in the series’ universe, focusing on two brothers named Sean and Daniel. After a tragic event takes place, presumably superpower-related based on the trailer, the two have to go on the run from police, and trek toward Mexico to stay with family. Based on the initial reveal, and the free demo experience Captain Spirit, Life is Strange 2 is set to strike just as emotional of a tone as the first game.

It’ll be interesting to see what Dontnod has done to change or improve on the experience, and it’s definitely one of the games to keep your eye on in September.