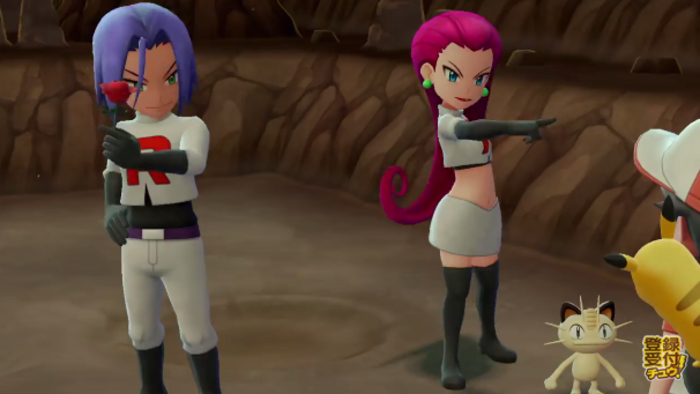 A new trailer for the upcoming Switch games, Pokemon: Let’s Go Pikachu and Eevee, has released this week showing off different hairstyles and accessories for your partner Pokemon and also revealed that – like other mainline Pokemon games – each version will feature exclusive Pokemon. A Japanese trailer was also released that showed just a snippet of two of our favorite villains that have a recurring role throughout the Pokemon anime and Pokemon Yellow version. Yup, Jessie, and James of Team Rocket are back in Kanto, probably trying to steal your Pokemon – who could’ve guessed it?

Pokemon: Let’s Go takes players back to the Kanto region and seems to make monster catching and battling as simple as ever for newcomers. The game is going to be fully compatible with Pokemon GO, letting users transfer their favorite Pokemon from the mobile application into their Switch game.

Pokemon: Let’s Go Pikachu and Pokemon: Let’s Go Eevee launches for the Nintendo Switch on Nov 16. The game will offer battling and trading via online services, but you will have to be subscribed to Nintendo’s premium online service once it rolls out later this year in order to access the features. A yearly membership will cost $19.99 or you can purchase the membership on a monthly basis for only $3.99.