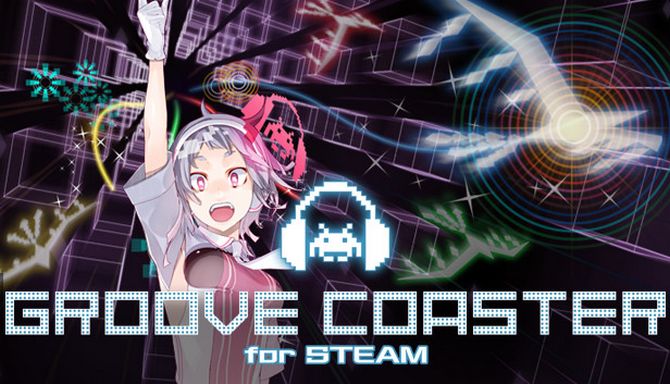 In 2016, I was lucky enough to visit Tokyo for two weeks, so of course I took the opportunity to dabble in some of Japan’s finest rhythm games, plus a few rounds of the then arcade exclusive Dissidia Final Fantasy, along with a slew of retro games. Even though my brother and I nearly beat Alien vs. Predator (damn the change machine for being so far away), my best arcade experience of that trip had to be when I discovered the incredibly unique, Taito-made rhythm game Groove Coaster: a spin-off to the Space Invaders franchise of all things.

There are two things that made Groove Coaster so special: the layout and the controller. The game is displayed on a vertical screen, and unlike most rhythm games, the highway isn’t static. Your on-screen avatar moves along a set path full of notes which you have to hit as they approach. No two songs look the same. The screen zooms in, zooms out, rotates, the path can become a maze — it gets pretty hectic and always keeps you on your toes. It can feel like a puzzle game at some points as well as a rhythm game, and that’s pretty great. Then there’s the two giant controllers in the arcade version, referred to as the “boosters” that have to be tapped, slid, or wiggled depending on the type of note. It all combines together to make one truly unique rhythm game.

This quality is also reflected in the soundtrack. It’s mostly techno and electronic music, but there are a few rock and pop tracks in there, too. They’re not just fun to play but great to listen to. I’m definitely going to add some tracks to my everyday playlists. Some of my favorite tunes include Play Merrily Neo, TRIPLE3T, and Vegas.

The question is: how well does this unique arcade game translate to a PC game? Well, it certainly feels lacking to say the least. The layout of the on-screen action remains intact but heavily compromised. When playing in landscape mode — the default mode and the orientation of home PC monitors — you have the option of playing in 16:9, 4:3, and 1:1. 16:9 is the vertical:horizontal aspect ratio of the original mobile and arcade versions. It’s like playing a portrait mobile game on your big PC monitor, filling the center of the screen and placing two giant black bars on the sides. It makes everything super tiny and makes it pretty hard to see what’s happening on-screen, especially during the harder songs where notes are flying at you from everywhere. For me, this mode was unplayable. 4:3 stretches the image a bit, and 1:1 stretches it even more making it a square. Personally, I’m not a fan of playing with a stretched image, but the 4:3 option doesn’t look too bad. It’s not ideal, but it was a decent option for my setup.

There is a way to play with the game’s intended vertical look; however, it’s not really practical. The game features a portrait mode which requires your screen be flipped 90 degrees. It can be quite cumbersome to set up, requiring a restart of the game, the orientation option in your PC settings to be changed, and that you actually muster the strength to lift and flip your monitor. Once you’ve got it all set up though, it really does look gorgeous. Everything looks crisp and clear and really shows off Groove Coaster’s beautiful art style. Unfortunately, this mode has its caveats, the main one being that it suffers from dropped frames during the more graphically intense sections. In any game, that’s annoying, but in a rhythm game in particular, it’s pretty game breaking. Also, no one’s really going to want to flip their monitor every time they want to play this one game. No matter how great portrait mode looks, I suggest sticking to landscape mode.

The other main compromise — and the PC version’s main issue — is the controls. The controls of the game aren’t optimized at all and are instead simulated on a keyboard, a regular controller, or a Steam controller. I started with the keyboard controls, and they suffice on simple difficulty but that’s about it. The inputs for slide notes are mapped to different keys, and it’s too hard to move your fingers all around during harder songs, even on normal. Regular controllers allow you to do slides or scratches with the control sticks as well as the buttons. This is much better and much easier but comes with its own set of problems. On an Xbox One controller, if you flick the stick quickly to perform a slide, the stick will register an input in the opposite direction that you flicked it in while it’s returning to the central position. That’s just enough to mess you up and make you miss a note. Eventually I adjusted to this, making sure to move the control stick a bit more gently, but it was still annoying. The third controller option, the Steam controller, I wasn’t able to try out, but it does look more promising than the other two options. All types of notes can be performed by tapping or sliding the touch pads on the controller. It sounds like it would be easier to use and more fun than a regular controller, but I doubt it’ll be as fun as the arcade’s booster controllers. Taito or Degica (the Steam version’s publisher) should have released a booster peripheral that you could buy separately. Either that, or the companies should have adapted the notes around the keyboard or controllers rather than making the controllers simulate the boosters.

The PC version doesn’t have much in terms of additional content, it really is just the arcade and mobile version ported straight to the PC. There isn’t any type of career mode, all you can do is pick from one of the 36 songs and play. You only start off with simple mode and have to unlock each difficulty for each song by beating it on the easier ones first. It’s a bit of a drag for music game veterans but at least allows you to learn the game’s mechanics before moving on to the harder stuff. Once you’ve completed everything, all that there is left to do is grind for high scores, full chains, and spend your currency on new avatars.

The PC version’s main problem is that it’s a straight port. They needed to change something in order to optimize the screen and controls for the hardware. Like Taiko no Tatsujin and Guitar Hero, this game should have shipped with a Groove Coaster controller. I was hoping to be addicted to this game, but I feel like I’ve hit a roadblock with the controller where I’ll never be able to get good at the game’s harder content. If you’re just a casual fan, however, you likely won’t have the same issues. The great layout and soundtrack are still intact, and overall, Groove Coaster is still an enjoyable and unique rhythm game and one that, despite my gripes, I still did have some fun with. Although, I can’t say that I wasn’t disappointed with the PC version.