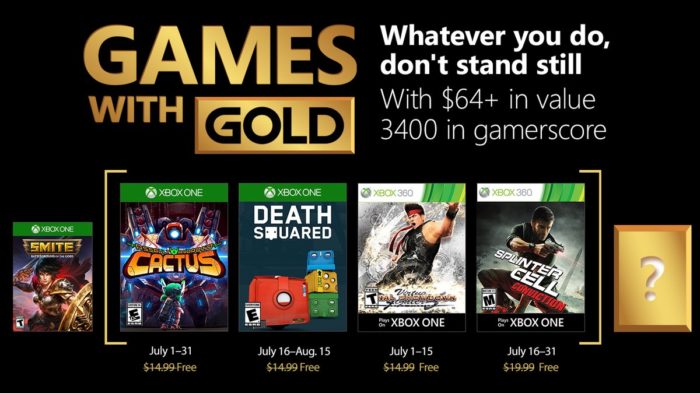 Today, as seen on Major Nelson’s blog, Death Squared and Splinter Cell Conviction have both been added as July’s second set of Games With Gold. They join Assault Android Cactus, which is also still available, free for Xbox Gold members. The previous free game Virtua Fighter 5: Final Showdown is no longer downloadable with Games With Gold.

Available until Aug. 15, Death Squared is a puzzle game where you control colored cubical robots trying to get to each level’s goal without being killed. It has a death counter, so you know you’re going to die a lot. It’s billed as a multiplayer game, with each player (up to four) controlling a robot, but can also be played solo by controlling two robots at a time with the analogue sticks. It’s regularly priced at $14.99, and playable on Xbox One.

Along with the previously mentioned titles included in Games With Gold, Assault Android Cactus is still available until July 31. Assault Android Cactus is a frantic twin-stick shmup where you control one of nine androids and shoot your way through hordes of enemies to recharge your battery, which allows you to keep shooting enemies, which gets you more battery charge… and so on. All that carnage is your way to the story mode’s ultimate goal: defeat the four guardians. It features single-player or local co-op with up to four players, daily challenges, boss rush modes, and more.