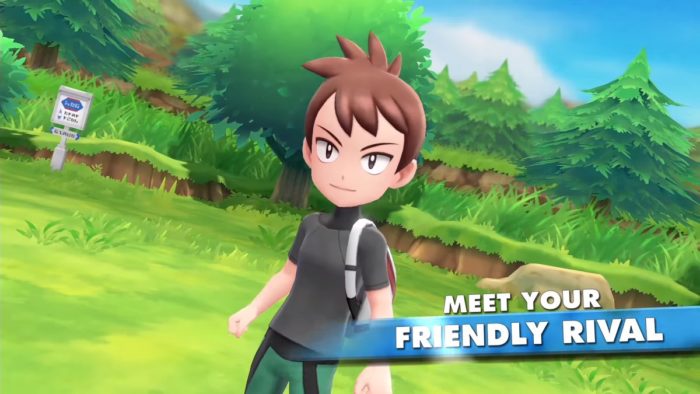 Nintendo recently released another trailer for Pokemon: Let’s Go Pikachu and Pokemon: Let’s Go Eevee, two games I am way more hyped for than I should be. Sure we’ve seen multiple remakes before this, but Let’s Go presents a massive overhaul to the traditional Pokemon formula that Game Freak has repeated for over 20 years. Put simply, the trailer was amazing —it gave me everything I could have hoped for. But between the gorgeous, colorful footage of a redesigned 3D Kanto region, were a few seconds of the main character’s rival, Trace, or as the new trailer shamelessly refers to him as, the “friendly rival.”

I know for a fact I’m not the only one fed up with the recent series of “nice rivals,” such as the overly enthusiastic Hau from Sun and Moon, or the utterly pointless and pushover pack of friends you’re forced to travel within X and Y. I was even more pleased when scrolling through the comments on the latest trailer to find several comments bashing this new “friendly rival.” Whatever happened to that lovable jerk Silver from Gold and Silver or the sickly yet determined Wally from Omega Ruby and Alpha Sapphire?

I realize that it’s not good taste to judge a product so harshly before its release, but the problem comes with Game Freak’s history of making the rival so annoyingly well-mannered and so easy to defeat that you’re no longer afraid of running into them after every gym leader battle. I can only presume that I won’t have to make sure my Pokemon are well-trained or even of high level to defeat Trace; that instead of standing in my way at every point of my journey, forcing me to push my Pokemon to their limits while testing my strategic nature, Trace will more than likely be a series of easy battles like Trevor or Tierno. Disregarding Blue and replacing his role with Trace represents the recent altercations Game Freak has taken with the franchise.

As a “friendly rival,” Trace constantly motivates the main character to do his best rather than presenting a challenge or a true threat. It’s not all bad —Trace represents the sense of camaraderie and friendly competition that the Pokemon Company wishes to push on its consumers. His existence certainly shouldn’t be a source of hatred or discontent. He’s just not a rival.

Rivals, though not necessarily always evil like in the case of Silver, shouldn’t be along for your adventure every step of the way. On the contrary, a rival, much like Blue, Wally, Chren and even Serena, is someone that challenges you at every step of the way, forcing you to better yourself as a trainer and as a strategist. All the aforementioned trainers also wish to follow their own paths to becoming respected gym leaders or powerful trainers or wish to become the champion of their region. These qualities and passions are what give these characters depth and give players reasons to care about their rivals’ paths as trainers just as much as their own.

As it is not yet confirmed that Red and Blue will not be in Let’s Go, rather than replacing Blue for Trace, Trace would make an excellent addition to the series as a friend and travel companion as opposed to the “friendly rival.” Admittedly, what Game Freak is doing is quite impressive and bold. As this game is obviously aimed at the more casual Pokemon fans in an attempt to draw them into the mainline series, Trace will undoubtedly accomplish what he’s intended to do: provide light, friendly competition that players can use as an indicator as to what level their Pokemon should be at rather than a heartfelt journey of a rival Pokemon trainer. As a veteran of the series, though, I’ll personally just be enjoying his cool design and Farfetch’d-like haircut.