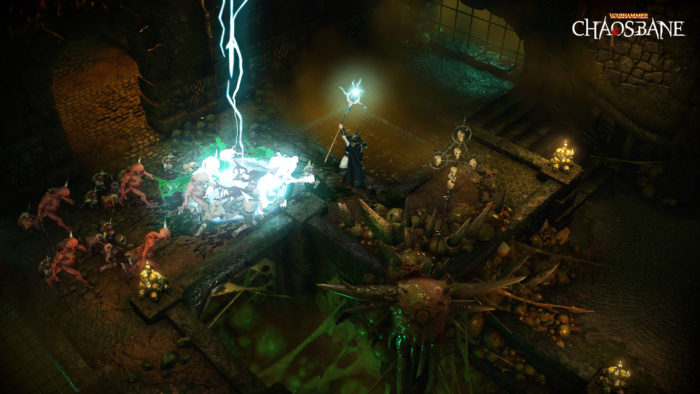 Games Workshop and Eko Software have teamed up to announce their latest console and PC game in the Warhammer series: Warhammer: Chaosbane. It’s first action-RPG to be situated in the Warhammer world,and it will take place in the Old World, a bloody old continent that’s seen its fair share of wars throughout history. You’ll play as a human, wood elf, high elf, or dwarf as you make your way through important setpieces in the Warhammer world.

You’ll travel through the old Empire capital, Praag, and Nuln, but unfortunately there isn’t much else we know about the game just yet beyond its official announcement. With E3 2018 around the corner, we’ll likely hear a lot more about it soon. Right now, you can play Warhammer 40,000: Inquisitor – Martyr later this summer, as it’s just been delayed from its initial June 5 debut date.

Its official description names it as another action-RPG with “vast and complex” mechanics that’s been redesigned for console players. The development studio Neocore is tightening things up at the moment for said console players to make sure the experience is as good as it can be. Unfortunately, players will be waiting a while for both Chaosbane and Inquisitor – Martyr, but luckily there’s a whole world of video game announcements waiting just around the corner with the opening of E3 2018 very soon.

Which game will you be looking forward to most based on the new information released today?