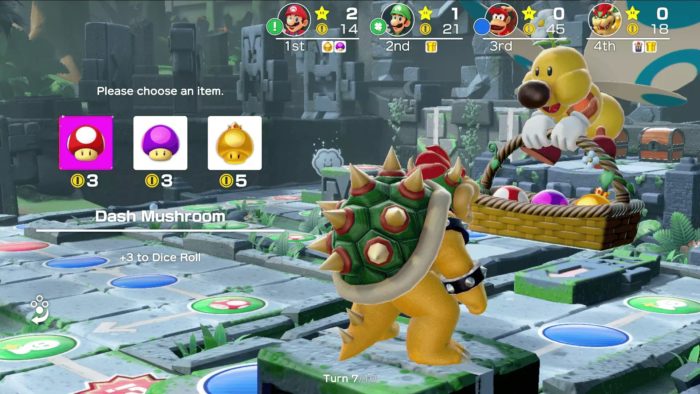 During the 2018 E3 June 14 Nintendo Livestream, the company detailed online multiplayer and other new things coming to Super Mario Party.

The Nintendo representatives showing the game off talked about Mario Fun mode and how it can be played locally and online, another new Toad’s Rec room game and the cooperative Partner Party mode.

The stream began with the co-op Partner Party mode. The first minigame featured took place on the Gold Rush Mine level, which is a square board that allows free movement and features King Bob-omb in the middle. Players were split into teams of two and they were to collect stars while going around the board. While doing so, the players would team up for their dice rolls, mixing dice rolls with different Dice Blocks. Basically, what you roll informs how many spaces you move on the board. Each individual players’ goal was to collect coins, stomp on opponents and buy stars when possible.

Following that, two new minigames were shown: Making Faces and Croozin’ for a Broozin’. Making Faces is essentially the make-Mario’s-face minigame from Super Mario Odyssey. The second mode is basically a free-running mode where players try to avoid the Broozers for the longest amount of time.

Later in the stream, Toad Rec Room was shown off. This is the mode heavily featured in the Super Mario Party announcement trailer that sees Switch owners connecting their systems in a number of different ways. The game specifically detailed during the stream saw players choosing one of three different map layouts based on different Switch console configurations. Once the map is selected, you basically control a tank as you attempt to destroy the other players.

The stream ended with the new Mario Fun mode, which allows players to compete against others locally and finally, finally, finally, for the first time in Mario Party history, online. Mario Fun mode lets players choose five minigames–out of over 80 available–to go through back-to-back. This mode will not only feature leaderboards, but a ranking system as well. Rewards that can be earned by playing will also be available in Mario Fun mode. The two games shown in this mode during the stream was Fuzzy Flight School, and Hammer and Sic ‘Em. The first game has you flying in a tunnel, avoiding Fuzzies for as long as you possibly can. The other mode sees players trying to bust the other team’s balloons while protecting their own.