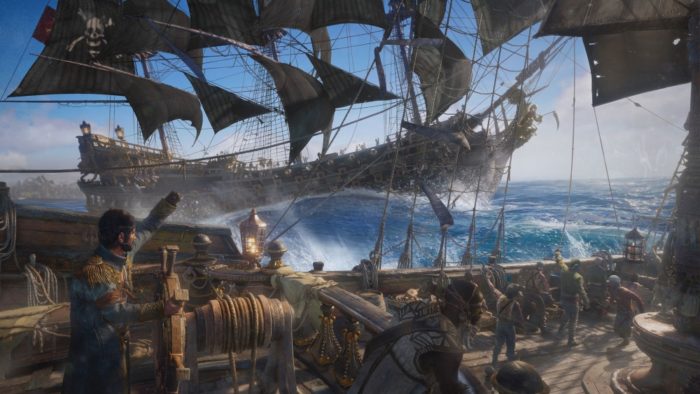 Its been a year since the 2017 Ubisoft press conference where Skull & Bones was first unveiled. Ubisoft Singapore’s pirate ship action game has player’s sailing the high seas in search of treasure, while fighting off enemy player’s ships. Ubisoft Singapore is known for their work on the Assassin’s Creed franchise, most notably Assassin’s Creed Black Flag. They brought naval combat to the franchise, and now are working on their own ship combat based game. Showing off their 5v5 multiplayer mode last year it looked incredibly similar to the battles from Black Flag.

The single-player campaign will have players sailing the dangerous Indian Ocean in their customizable pirate ship in search of sweet pirate loot. Players can team up to sail the highly contested waters together if it is too dangerous to go alone. This cinematic trailer shows off new environments and characters to potentially ally with.

This gameplay shows off planning and then hunting against a ship hoarding a large stack of diamonds ripe for stealing. Activity off of the ship, like walking around and talking to merchants to further customize your ship before you go into the big battle. Forming an uneasy alliance with another player ship to take down the opposing AI controlled frigate is just one strategy you can implement to walk away with the most loot, but beware because treasure can cause anyone to get greedy, and potentially turn on you.

Skull & Bones releases in 2019 for PlayStation 4, Xbox One, and PC and you can sign up for the closed beta here