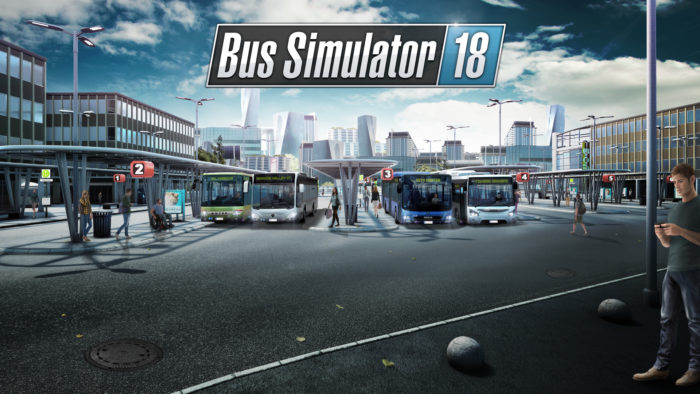 Not only am I a complete newbie at vehicle simulation, I’m also a complete newbie at, well, vehicles. I can’t drive, and haven’t even thought about learning how to drive. In racing games or open world games, this isn’t a problem, but in a driving sim where the goal is to drive correctly and courteously, it had an effect on me that I wasn’t expecting. I was scared. Scared of damaging the bus or killing innocent civilians. It was pretty surreal, but thanks to great controls, I managed to overcome my fear.

The game opens with a lengthy tutorial on how to correctly drive your bus. You can’t just pull the right trigger and go from there, you have to think about using all of the different controls on the dashboard: doors, windshield wipers, warning lights, indicators, ramps, and even the ticket machine. It’s meticulous down to the adjustment of your seat. Besides taking care of what’s in the bus, there’re many things you’ll have to look out for in your peripheral vision: red lights and speed limit signs, for example. It does wonders for immersion, especially if you’re playing in realistic mode. Simplistic mode reduces the amount of controls you have to worry about to below 10, but in realistic mode, you have to be on the ball about everything. If you’re having trouble with the keyboard shortcuts, you can rebind any and every key to your liking. You can also opt to manually click on the controls on the dashboard rather than using the keyboard shortcuts. This works well, as everything is clearly labeled for you with a quick press of the tab key. It’s probably not the most efficient way to play, though. There are also options to steer using the mouse or to use a steering wheel peripheral if you’ve got one.

In terms of the actual physics of the bus, they seem pretty great from what I can tell. Buses feel very weighty; you’ll have trouble starting and stopping them (as you should), but it’s something that I quickly got used to. Learning how to properly turn without scraping any cars with the back of the bus is very satisfying, especially when using some of the longer ones in the game.

The way the game handles its physics and controls really make for an immersive simulation. However, you don’t literally have to role-play as a bus driver to do well in the ‘game’ part of Bus Simulator 18. Unfortunately, it didn’t take long for me to notice some flaws in the game’s design. Obviously, the point of Bus Simulator 18 is to make it feel like you’re a bus driver, and the scoring system tries to reflect this. You earn money for things like stopping at a bus stop on time and with a good stopping position, sticking to the speed limit, indicating at turns, etc. While you are penalized for running red lights and a few other misdemeanors, you’re not actually penalized for reckless driving. As long as you’re not hitting cars and staying under the speed limit, you can stop on crosswalks, or drive on the wrong side of the road. If you’re running out of time, it can actually pay to not be courteous. None of the passengers will complain or even notice. It’s bizarre that this is the case, and it’s a bit of a shame.

The passengers themselves also lack any sense of realism. It feels like Stillalive Studios, the game’s developer, did the bare minimum to slot the passengers into Bus Simulator 18. They’re hilariously robotic. All of the voice actors recorded the exact same lines, so they all end up saying the same thing. Most of them prattle on about some show called “Winter of Passion.” Okay, I get it, you didn’t know the guy would turn out to be an amputee, I don’t need to hear that for the 1000th time! One passenger complained about falling asleep and missing his stop immediately after stepping on to the bus. Do yourself a favor, and turn the dialogue volume setting to zero. Although, I must admit, “I used to be a banker, but I lost interest” did make me chuckle.

Progression in Bus Simulator 18 is all about completing simple objectives. These include creating and driving certain routes, hiring drivers, using a certain bus, and more. Completing objectives and leveling up allows you to unlock more stops and more buses. It’s not long before you can start hiring drivers and assigning them to different routes to earn money for you. The maximum that a hired driver can make from a specific route is affected by your best score on said route, encouraging you to drive more routes and strive for better performances. The progression system works well enough, and gives players something tangible to focus on, while also rewarding players with new unlockables and a larger world.

If you lose too much money, which can only really be caused by an unreasonable amount of collisions, your company can go into bankruptcy. This option can be turned off as soon as you start the game. In fact, many different options can be tweaked to your liking, such as trip mode (allowing you to make round or looped trips) or whether you start a trip from the garage. It allows you to scale and decide the level of realism that you want.

You are also presented with a character creation screen at the start of the game. However, the only time that you’ll actually see your created character is when you get out of the bus to roam around, as the camera shifts to a third-person view. Roaming around is only really useful for the conductor mode or for when a passenger has left a valuable on the bus and you need to return it. Don’t get too excited about the prospect of a character creator, though, as it’s seriously lacking in options.

Bus Simulator 18 includes an interesting multiplayer mode. You can run your bus company online with up to four people. Set your company to public and anyone can join to help you make some sweet cash. It’s a welcome mode, and it’s fun to see multiple player-controlled buses in the same world. Running a company in multiplayer mode doesn’t change the fundamentals of the game in any substantial way besides the ability to undertake co-op trips, in which one person takes on the role of the conductor, but it isn’t that fun. The conductor can pick up rubbish or catch fare dodgers while the bus is being driven, but this is something that can also be done in single-player when the bus is stationary. It can be very boring for the person not driving. If you’re just running your bus company on your own, you’re not missing out on much.

Bus Simulator 18’s biggest flaw – and this is a huge one – is that it is really buggy. I’m not just talking about small graphical or audio bugs (those areas are actually pretty spot on), I’m talking about gameplay bugs that can cause a lot of frustration. There are little annoyances like the indicators seemingly having a 20% chance of getting stuck, causing you to lose money for indicating on a straight or cars refussing to move at green lights or crosswalks, forcing you to go around them. Then there are bugs that can cause a whole 20 minute trip to go to waste. I had an instance where an NPC got stuck in the doorway of the bus and would not move, forcing me to abort the trip or another instance where an objective would just not register after meeting the requirements, meaning another waste of time. These were all extremely annoying, but the worst bug of all was when the collision detection completely bugged out, causing me to lose a lot of money. I lost so much, in fact, that my company nearly went bankrupt!

Even if the game was completely bug free, Bus Simulator 18’s biggest problem is that, as a game, it just gets boring. I suppose that’s just the nature of the game though. I was having a lot of fun at first, learning all of the controls and overcoming my fear, but once that all subsided, all I’m doing is driving a bus. I was not best pleased whenever the rush hour traffic warning appeared before a trip. Don’t get me wrong, I still appreciate Bus Simulator 18 for what it is: a mostly great vehicle simulation game that, despite its flaws, does a good job of immersing the player in the role of a bus driver. That’s the point of the game, so I can’t fault it too much for achieving that. But as a ‘game’ it’s pretty boring. When you mix boring with the frustration of the bugs, it’s just not that pleasant of an experience.

If you’re one of those people asking yourself “How can this game possibly be fun?” then you’re probably not the kind of person who is going to enjoy it. If you’re already a fan of vehicle simulation games, you’ll likely still get a kick out of this one, despite its flaws.