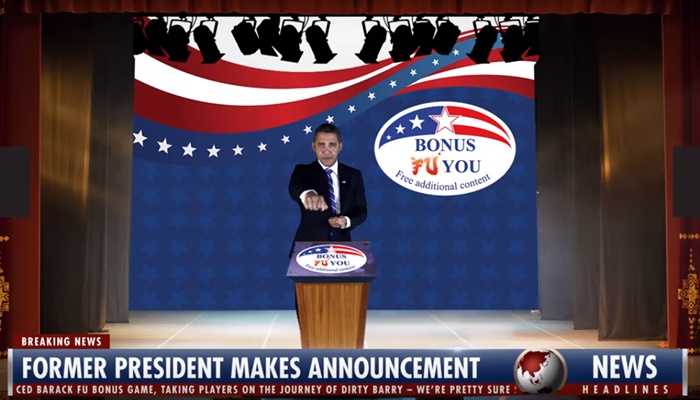 The 2018 revival of Shaq Fu, dubbed A Legend Reborn, brought the Big Aristotle back to the fight, but developer Wired Productions also promised a “Bonus Fu” featuring a mystery hero. The mystery is no more as the company revealed their DLC hero to be the 44th president of the United States, Barack Obama. Dubbed “Dirty Barry,” the former president is front and center as the playable character in Barack Fu: The Adventures of Dirty Barry.

The “independently created and produced” Shaq Fu add-on will feature Obama investigating a string of celebrity murders across multiple locations, including Paris and outer space, with his feet, fists and a litany of weapons. Players will fight through waves of politicians, robots, hackers and rappers with a number of firearms and a drone strike dubbed the “Peace Prize” in a vigilante quest for justice. The hand-to-hand combat will also feature power moves, such as the Barack ‘n Rolla and South Side Smash, that players can chain together into combos before entering Dirty Barry mode in an effort to run up your killstreak.

Wired Productions is quick to point out that their reimagining of the former president is strictly a parody, unlike their relationship with “endorsed celebrity” and series namesake Shaquille O’Neal. “This one is not an endorsed celebrity but a parody of one of the greatest heroes of our time,” said the company. That distinction is welcomed as it would be easily assumed that the charismatic politician wouldn’t be too keen on his inclusion in the game, no matter how far the action shifts into absurdity.

The goofy bonus is available as a free download for owners of Shaq Fu: A Legend Reborn and Wired Productions hasn’t released any details regarding a standalone release of the title.