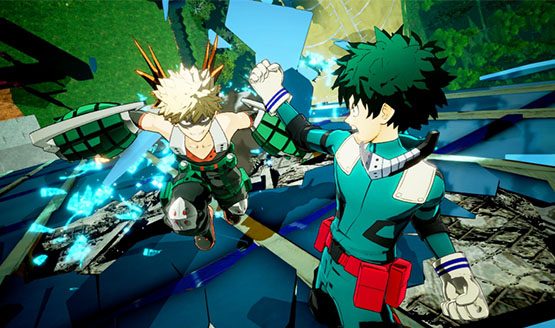 Bandai Namco revealed a new trailer at E3 2018 for the upcoming fighting game based off of the popular anime My Hero Academia, titled My Hero One’s Justice, showcasing among other things the playable characters in the game’s roster. You can see the trailer down below.

The trailer shows off a number of major heroes and villains from the show, adding majorly to the roster of characters that has been gradually revealed over the past few months. Now among the roster are the major villains Tomura Shigaraki, Stain, Himiko Toga, and Dabi. On the hero side of things, the trailer presents All Might, Shota Aizawa, Eijiro Kirishima, Kyoka Jiro, and Fumikage Tokoyami. Every character battles with a unique move-set and their own special quirk, and all feature voice acting from the cast of the show.

The trailer also discusses customization options and online play, presenting the various options that players have to decorate their favorite character in cosmetic accessories in order to stand out from other players online. The customization options do not allow players to make a hero from scratch, as some other fighting games do, but instead focuses on allowing them to personalize their own version of existing characters.

My Hero Academia is an action-comedy anime that follows Izuku Midoriya, a boy born without superpowers in a world where the majority of the population has them, but who still strives to become a great hero like his inspiration, the famous All Might. Through a serious of complicated circumstances, Izuku receives a small fraction of All Might’s power (more commonly known as a “quirk”), and must learn to control his newfound strength as he advances through the U.A. High School hero academy. The show is currently in its third season, and is set to have an animated film set to release in theaters later this year.

My Hero One’s Justice is planned for release on Steam, PS4, Xbox One, and Nintendo Switch in October 2018.