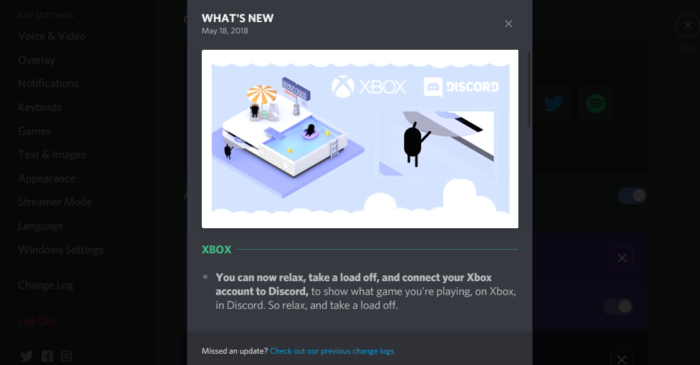 Microsoft and Discord’s previous announcement of plans to introduce Xbox-Discord account integration have come to fruition. On May 18, 2018, both Xbox and Discord pushed out an update which publicly opened up account integration, allowing users to link their Xbox account to their Discord account. This integration allows players to display what games they are playing on their Xbox on Discord. This comes after an update that allowed users to share what they were listening to on Spotify.

To actually link the accounts, you need to go through a fairly simple verification process. An official blog post describes the process. If you are starting from the Discord client, you need to open it on either your mobile device or computer. Navigate to the User Settings, and then to the Connections tab. Here, you will see a list of the accounts you can link, such as Twitch, YouTube, Steam, and now Xbox. From here, click on the Xbox Live button to open the login page. This will link your account. If you are starting from your Xbox, start up your system and navigate to the Account Settings menu. There, you will find a new option to link your accounts. Follow the instructions provided, input the code into the Discord app, and your accounts will be linked.

The Discord update also brought many other effective changes, such as the mobile app being optimized to use less mobile data and less battery life, though the battery life update only works on iOS devices at the moment. It also introduces the ability to play audio files directly in the client, as well as the ability to share audio while using Screen Share.

On the other end, the Xbox update, along with the integration, also introduced an updated 120hz refresh rate at 1080p and 1440p on both the Xbox One X and Xbox One S, if they are connected to a display that supports such a high refresh rate. They also introduced a video trimming function in the guide overlay, making it easier to share certain clips.