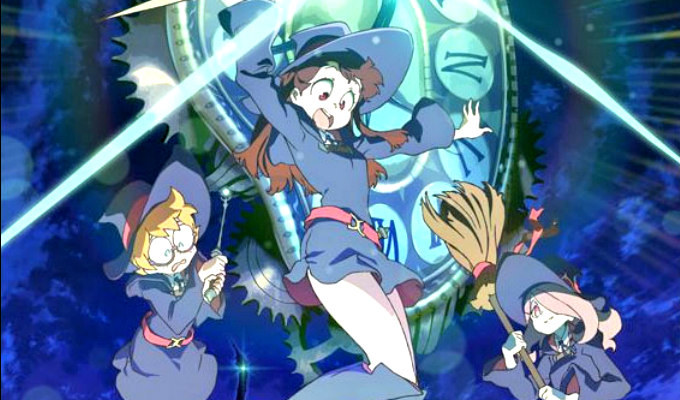 Recent anime games, like Dragon Ball FighterZ and Attack on Titan 2,  have done exceedingly well by leaning into their source material, creating unique experiences that revolve around what their respective series are about. Little Witch Academia: Chamber of Time is another game that tries to do just that, and while it succeeds in some areas, it falls flat on its face in others.

For anyone unfamiliar with Little Witch Academia, it follows the story of Atsuko Kagari, a young witch in training at the Luna Nova Magical Academy. As a child, she saw a witch named Shiny Chariot perform, and it’s been her dream to be just like Chariot ever since. Akko, as she goes by, doesn’t have much magical talent, unfortunately, which makes her have to approach situations differently.

Chamber of Time picks up midway through the first season of the anime, as Akko, Sucy, Lotte, and the other girls at the academy are preparing to go on summer vacation. In an unexpected turn of events, however, the witches discover a mysterious chamber known as the Horologium Chamber in the library and an hourglass that sets them in a time loop. Akko and the others have to continuously live through the first day of summer vacation while unraveling the mystery of why it happened, and this plays into both the story and gameplay of Chamber of Time.

The game is essentially split into two different loops: non-combat exploration, and beat em up dungeon crawling. The bulk of the experience has Akko running around Luna Nova, helping various students and teachers, solving mysteries, and investigating the Horologium Chamber. The entire game is dictated by a time system, with different events and characters popping up at different times throughout the day. Every two hours in-game the entire school moves forward with the day bringing new options. You have main objectives to see out, but there’s also a number of optional sub-events to complete that have Akko solving problems and helping students.

To its credit, Chamber of Time absolutely nails the tone of Little Witch Academia, and its art style is vibrant and expressive. The writing is fun, and the game’s story feels like a natural extension of the show, almost like a very long episode. This is only strengthened by the new anime scenes included in the game, which are animated by Studio Trigger themselves. I did enjoy seeing characters interact, and seeing Luna Nova come to life is a great experience for any fan of the show.

Sadly, navigating around the school takes a bit of getting used to as the map system isn’t much help. The minimap at the top rotates around as Akko moves, while the general map only displays at one angle, and doesn’t show Akko’s exact location, only what area she’s in. You need to wrap your head around the actual shape of every room, and this can lead to some confusion initially when trying to explore. This tedium seeps into quite a few of the game’s other aspects as well. All of your magic in the game including fast travel requires potions to use, which you can only get from the school store with magic gems. Said gems can only be gained by exploring dungeons, meaning to get more and advance the story you might need to grind out a couple dungeons, ultimately slowing down the pacing of the story.

This tedium translates to the game’s battle system and dungeons as well. Chamber of Time uses a beat em up combat system, letting you play as any of the main witches. You have light, heavy, and ranged attacks as well as a host of spells to use. The biggest problem here is that the controls just don’t feel precise enough for the combat. Moving characters can be a bit sluggish, and I often had trouble telling if my character was exactly next to the enemy, resulting in many missed attacks.

Each big dungeon has a specific gimmick, which can end up being more frustrating than anything. For example, one dungeon has you on a mine cart, and requires you to pick the right direction to find the boss. The problem is, if you pick the wrong directions it loops you back to the beginning, but you’ll sit on the cart doing nothing for a good 45 seconds before anything happens.

The same can happen with bosses who have their own unique mechanics as well, but don’t always do a good job of indicating what you need to do to beat them. One particularly frustrating boss has you going up against an ice dragon. You can build ice blocks on the stage by mashing X, and can’t damage the boss as it’s flying in the background. At no point does the battle give you a good indication of what you need to do with these blocks, and the boss can break them by either flying through them or hitting them with ice breath. Building the blocks three high would cause the dragon to get stunned when he runs into them, opening him up to attack for roughly 10 seconds. Figuring all of this out was tedious enough, but actually beating the boss took a good 25 minutes of just rinsing and repeating mashing X. The difficulty for bosses can also be all over the place, with others being taken down in two to three minutes with very little effort.

It also doesn’t help that your AI companions are quite dumb, getting locked in running animations if they can’t attack an enemy, and making no effort to dodge attacks from bosses. Now, you can play the game in co-op with friends, but again Chamber of Time does nothing to explain how you do that. It was only through exploring that I discovered the door allowing me to play co-op.

Combat does have an upside though, as there’s a wealth of different spells to unlock and try out. Making different sets of spells for each character and building movesets you like can be fun, even if combat drags at times. There’s also a ton of different equipment to put on each character, allowing for further customization.

It’s quite sad that Chamber of Time so actively works against you in many ways. The tediousness of everything, from school exploration to combat, can really start to drag on you after a while, even if you do enjoy the story and characters. The game does a marvelous job of matching the anime’s tone, but because of its problems its hard to anyone really getting invested that isn’t already a fan of the series. The characters of Little Witch Academia are so charming, and there is some fun to be had here, just know that it comes with a heavy dosage of tedium at the same time.