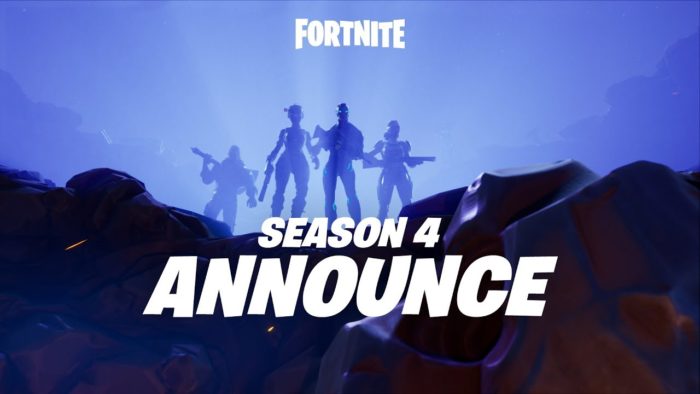 After what seems like an eternity, we’re finally able to jump into Fortnite Season 4 today, as it’s started off with a literal bang — that meteor has finally crashed onto the map, making big waves and changing the landscape of the game as we know it. You can check out the cinematic introduction below, in case you weren’t around for the maintenance to give it a look, and take in everything that’s going on. Kick off the season right with 50 Battle Stars and five free tiers, and you’ve got the recipe for something awesome for Fortnite fans.

The biggest change comes by way of Dusty Divot, which as you’ll recognize is not the words “Tilted Towers destroyed.” Instead, Dusty Divot used to be Dusty Depot until the meteors struck and totally obliterated everything. Head over here to find a ton of Hop Rocks, which let you defy gravity in a big way. You can jump into the air and float around with the greatest of ease with these new items. In addition, the new location Risky Reels has been added with the meteor’s crash. Not to mention there are now shards of it everywhere as far as the eye can see.

There’s a ton of new Season 4 skins you can pick up as well — those are the “superhero” looks we thought we saw via Twitter, which you’ll see as you start rocketing up through the tiers. It looks like many of our predictions didn’t turn out to be true after all, but we were close and we all gave it a run for our money. That should count for something, right?

Season 4 starts now! Jump in and witness the aftermath of the impact.
4.0 Patch Notes: https://t.co/siqlV4Bfu6 pic.twitter.com/Zuqhlkmeco

Now get out there and start decimating those other players!