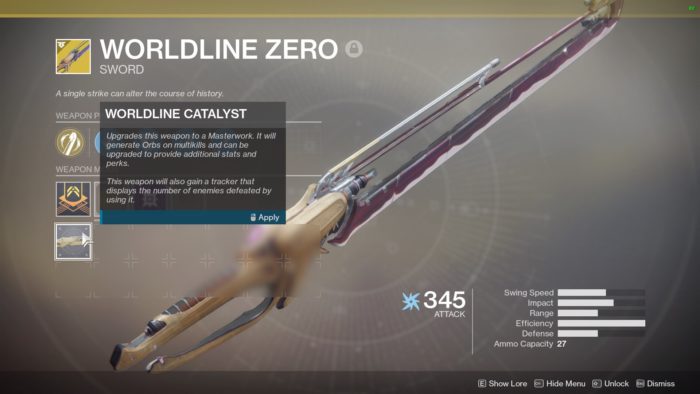 The Sleeper Simulant is back in Destiny 2: Warmind, and if you want to get your hands on this badass looking Linear Fusion Rifle, you’re going to have to put in some real work.

First off, the Exotic quest is only available after you complete the Warmind campaign, and after you complete the post-game quest from Ana on Mars. She’ll reward you with an IKELOS Hand Cannon, and you can check your Pursuits in your inventory to see the steps required to progress the quest. The first step will require you to get precision kills on Hive and Cabal enemies with the Hand Cannon, which should be pretty easy if you just hang around the Futurescape.

After that, you’ll have to kill powerful enemies with the weapon equipped. Unlike the first step, you don’t need to get the kills with the weapon itself, just holster it in your Energy slot and use whatever other weapon you’d like. Next, you need to complete five Heroic Strikes with the weapon equipped, clear three Escalation Protocol levels, and open 15 Sleeper Nodes on Mars. Finally, you’ll unlock a 360 Power mission. After completing the mission, you’ll finally be rewarded with the Sleeper Simulant.

Aside from the Sleeper Simulant, there are two other Exotics you can get your hands on in Warmind. One is an Exotic sword called the Worldline Zero, and the other is a Sparrow. Both are obtained through the same method: by collecting Lost Memory Fragments on Mars. This is definitely as tedious as it sounds, but we’ve got a guide to help you out with all the Fragment locations.

When you find a Fragment, you’ll need to shoot it with different elemental weapons, depending on what color it’s glowing. White is for Kinetic, orange for Solar, purple for Void, blue for Arc, and red for the Valkyrie javelin. Once you discover 35 Fragments, you’ll unlock the Exotic sword Worldline Zero. If you manage to find all 45, you’ll get the Sparrow.

These are all of the Exotic quests we’ve found in Destiny 2: Warmind so far, but we’ll update this post if we discover some more. Be sure to check our wiki for more information on the game.