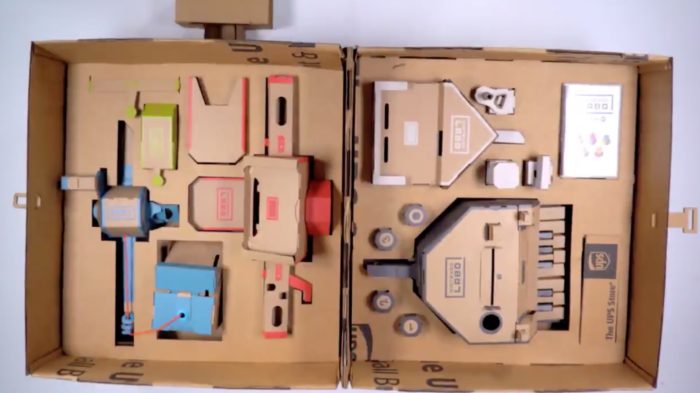 It a cute PR video, UPS made a satisfyingly perfect carrying case for all of the Nintendo Labo cardboard creations. Dubbing it the Labo Toy-Con-Trainer, it comes complete with wheels, pully, and even functional cardboard lock to keep your creations safe.

#NintendoLabo inspired us to be more creative with cardboard. And since we’re such experts at packing things in boxes, well… pic.twitter.com/OM1BFo8UuT

While the case isn’t for sale and was made simply for the video, it didn’t take long for Labo owners to see the video and demand the blueprints be released so they could make a similar carrying case of their own.

Thus far there is no official case to keep your Nintendo Labo toys in, and leaving them out can risk wear and tear on the cardboard. Nintendo even announced that staring April 20 you could purchase specific Labo cardboard pieces if they were destroyed, saying in the Labo FAQ, “If you need replacement materials, you’ll be able to purchase them starting April 20, 2018, at http://store.nintendo.com or by calling Nintendo Consumer Service at 1-800-255-3700.”

There is obviously a market for UPS’s creation, so it should hop on the Nintendo Labo hype and make the most of it. We have to say though, we ship this relationship between UPS and Nintendo.