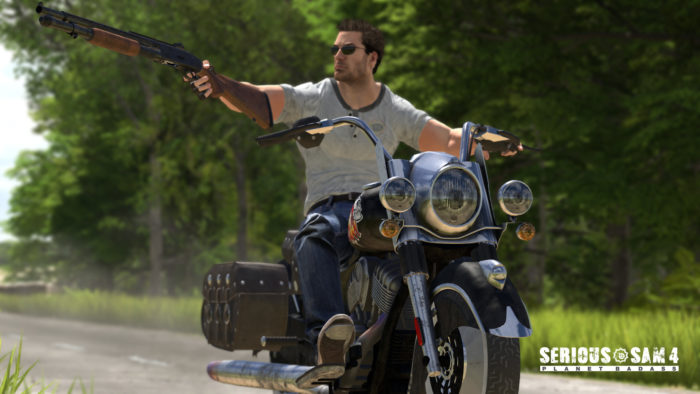 Croteam, creators of the Serious Sam Series and Puzzle game The Talos Principle, have announced Serious Sam 4: Planet Badass. There’s not much info on the game yet, but Croteam promises a full reveal at E3 this June in Los Angeles. The announcement does come with a slick teaser trailer which does confirm the return of the Beheaded Kamikaze character inherent to every title in the series.

The teaser also shows off Sam riding a new cruiser motorcycle, which may be related to the game’s Steam Store description which says the game is “on a brutally bigger scale.” this could mean larger levels, but it could also allude to an open world, which is why Sam would need a vehicle to get around. Additionally, the title logo for the game shows eight silhouettes besides Sam in the middle, which is because the game seems to feature multiplayer in every form. The Steam Store page claims the game has cross-platform multiplayer, as well as Co-Op.

Console releases have not been confirmed yet, but every previous release has been released on Xbox and Playstation before, and the Steam Store promises full controller support.

Fans of the series know that although there have been plenty of spin-off games for the series, eight including three VR re-releases of the first three games, this is the first entry in the Serious Sam series since 2011. Serious Sam 3: BFE was the last mainline entry in the series, and acted as a prequel to Serious Sam: The First Encounter which was the first title in the series released in 2001. The game took place entirely in Egypt, which may explain why the Steam page’s description promises “not a single desert level.”