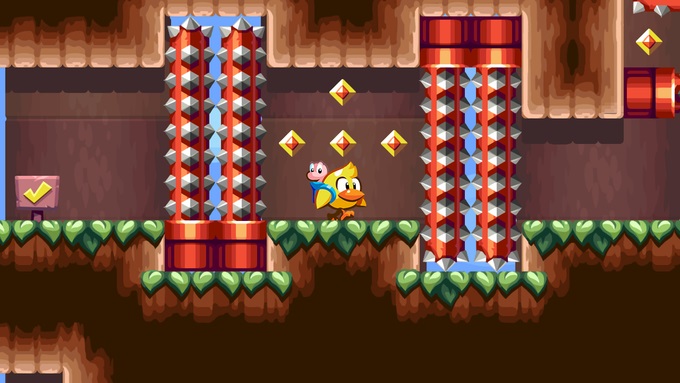 The Kickstarter campaign for Chicken Wiggle Workshop launched on March 6. It is a platformer being developed by Atooi (the same devs behind indie games Mutant Mudds and Xeodrifter), and has a heavy focus on creating and sharing your own levels. With four days left of the campaign, the game has reached its goal of $30,000, and is officially in development for the Nintendo Switch.

The original Chicken Wiggle released on Aug. 17, 2017 exclusively for the 3DS eShop, five months after the Switch had released. Jools Watsham, the founder of Atooi, was severely disappointed in the sales. In a blog post, Watsham said “Chicken Wiggle’s first day sales were so low, I thought there was an error in the sales report,” and clamed that “the Nintendo 3DS eShop is dead for “Nindies”.

Atooi is having another crack at the game with this new Switch port, which, thanks to Kickstarter backers, is now fully funded. Watsham calls it an “Easter miracle” on Twitter.

AGABOOOOOSH! Chicken Wiggle Workshop @kickstarter for #NintendoSwitch just got funded! It's an Easter miracle!! It went from 🐣to 🐥. Thank you to everyone who believed in the project! ❤️ Now, can we hit the stretch goals!? https://t.co/H1p0rz5Q0m

This new version of Chicken Wiggle is a port of the 3DS game, with “new HD artwork,” but if you prefer the pixelated look of the original, you’ll be able to toggle between the two visual styles. This version will also be compatible with all of the levels created on the 3DS version.

The game’s title comes from the names of its two characters, Chicken and Wiggle. Chicken can use Wiggle to stretch and grab, and they can combine their strengths to stun, whip and peck their enemies.

While the game is fully funded, there are still a number of stretch goals that have yet to be met. The first stretch goal, requiring $35,000, is a new orchestrated soundtrack featuring music from Grant Kirkhope.

If you’d like to back Chicken Wiggle Workshop, you still have four days to do so over on its Kickstarter campaign page.