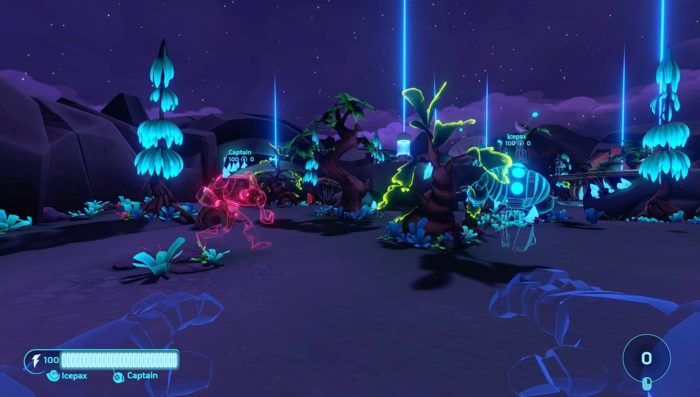 Aftercharge, an independently developed, asymmetrical, competitive team shooter due out this year, is a blast. We demoed it at PAX East this past weekend, and based on our impressions of it, it has everything it needs to be a hit indie title in the vein of Rocket League. It will be releasing on the Nintendo Switch, Xbox One, and PC at some point this year, and will feature cross-platform play between the three versions of the game. Check out our full impressions of Aftercharge if you want the deets on that. Spoiler: it’s fun.

However, what’s also interesting is that the world’s most popular current-generation home console, the PS4, is being excluded from this party. At a glance, it seems crazy that if a developer is happy for its game to be multi-platform, that it would exclude the most popular non-PC platform! I’m not an expert on business, but I would assume that more consoles, would give you the highest chance to sell more games.

I had a few minutes with communications officer Laurent Mercure, and asked him what the deal with that is, and here is what he had to say:

“It’s really, really simple. It’s a game that’s more at home on the PC since it’s a shooter and the shooter crowd is big on PC. We’ve always been very good friends with Microsoft, we launched our previous game Knight Squad on Xbox One and on Games with Gold. So we have always had a great relationship with them and it was a natural fit for our first console platform. And then we have a good relationship with Nintendo and they do allow cross-platform.

Cross-platform was extremely important for us because we know the risk of launching a multiplayer-only game as an indie studio with indie marketing. We want to have one huge player pool.”

Specifically, regarding his aspirations about the Switch version, Mercure added:

“What made us more confident about launching on the Switch was the enthusiasm of Nintendo themselves when they saw the game. They thought it was a good fit for what they have. Also, Splatoon is working really well on that platform, and there are some elements that we think are comparable to Splatoon. It is small, in terms of map scale, the teams are also small as well, and it is novel in terms of its mechanics.”

The first few weeks and months is when player impressions are made for most games with some exceptions like Rainbow Six Siege. If there’s a conception (true or not) that a game is DOA, then it can be a death knell for a small indie game like Aftercharge. Having one big pool for all three platforms is the best chance for them to make sure the player population is healthy from the get-go. Developing for the one console that doesn’t play nice in the cross-platform sandbox, the PlayStation 4, would likely be a big risk and potential waste of money if it can’t survive on its own. Avoiding the PS4, at least for now, does make a lot more sense when you look at it from that perspective.

If Aftercharge is popular, I’d wager that a PlayStation 4 version could be on the table later on. We’ll see when it releases everywhere else sometime later this year.