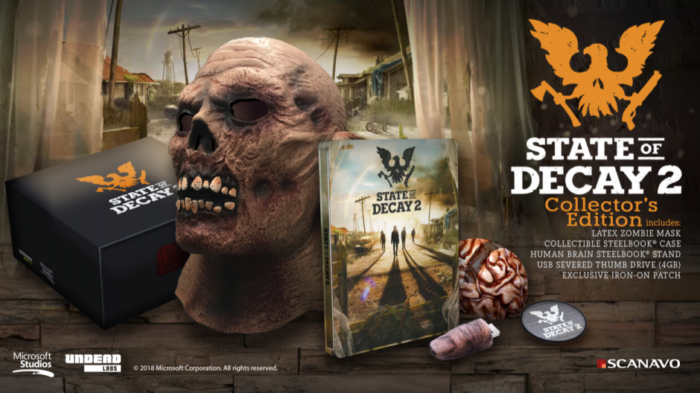 State of Decay 2 is coming to Xbox One and PC this May, and with it you’ll get a set of some pretty cool extras if you decide to purchase the State of Decay 2 Collector’s Edition. What’s on the docket? Oh, a zombie mask, for one. The game will be available with both a Standard Edition and Ultimate Edition, and it’ll also be up for grabs as soon as the game launches on May 22.

The Collector’s Edition comes with everything you need to get your zombie-hunting story started with a steenbok case, thumb drive, zombie mask, patch, and human brain stand for your steelbook. It’ll run you $69.99 for the whole shebang, but if you’re less interested in all the gory details, as it were, you can nab the Standard Edition for $29.99 and the Ultimate Edition for $49.99 to get early access and additional content as well.

Undead Labs’ sequel to the 2013 title is a third-person zombie survival game that takes place in an open world with co-op play for up to three players to join in on. The game will be up for grabs as an Xbox Game Pass title as part of the service’s subscriber feature where all forthcoming Microsoft Studios games will be included for free to play on launch day.