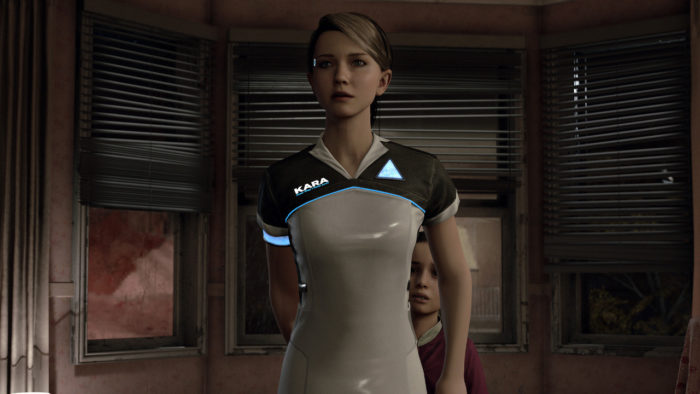 Detroit: Become Human is closer than ever now, and we’re getting a closer look at what some of the characters are actually like. The latest three videos introduce us further to the characters Connor, Markus, and Kara. If you’ve been hoping for a little more information about what to expect from these personalities, consider your android-based prayers answered.

Connor is a prototype that’s named RK800 from a company called CyberLife. He’s been tasked with helping out human detectives along with their investigations in terms of additional tech assistance — makes sense, right? He’s got a molecular analyzer built right in and is very intelligent, cold, and determined. He’s ready to do anything to fulfill his mission and ends up assisting the Detroit police along with Lieutenant Hank Anderson, who just happens to hate androids. That’s the way it usually goes, right? Connor has to learn how to use his psychology module to earn his partner’s respect.

Meanwhile, Markus (RK200) is an android who belongs to a disabled painter named Carl Manfred, who treats him more like a child and a human, even teaching him how to paint. As Carl treats Markus a bit like a son, it makes his actual son Leo feel a little left out. Markus is a central character in the upcoming android revolution, as you’ll soon find out.

You’re probably the most familiar with Kara, or AX400. This domestic assistant is a pretty common model that can cook over 9000 dishes, speak 300 different languages, assist children, and take care of the house as well. She belongs to unemployed taxi driver Todd Williams, and takes care of his daughter Alice. When Kara learns that neither she nor Alice are safe with Todd, they make a bid for freedom, essentially becoming fugitives.

Detroit: Become Human is going to be a wild ride, for sure, and it’s releasing on PlayStation 4 on May 25. You can check out each character’s individual trailer below.