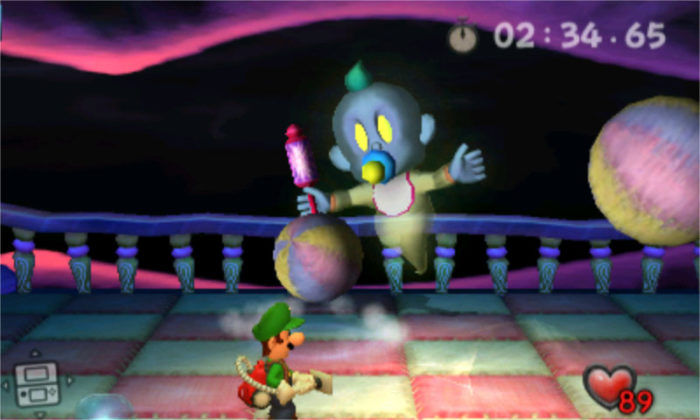 In the latest Nintendo Direct, the company announced that the GameCube launch title Luigi’s Mansion is going to be remade for the 3DS. The game’s graphics will be changing a little from what we saw in the original, and will look closer to the 3DS’ sequel, Luigi’s Mansion: Dark Moon. We got a good look at the game in the reveal trailer, but Nintendo has now provided us with some new high quality screenshots.

These screenshots give us a good look at some of the game’s portrait ghosts, as well as the game’s antagonist, King Boo. In the original game, one of your main objectives was to capture all of the portrait ghosts, which are unique ghosts that serve as the game’s boss battles. The screenshot that shows both screens gives us a look at how this version’s map system will differ from the original’s. In the GameCube version, you could open the map by pressing the Y button, pausing the game, and bringing up a separate screen. In the 3DS version, the map is located on the bottom screen, and is updated in real time. It still features the same ‘Game Boy Horror’ branding that was in the original. One of the screenshots even shows Luigi wielding this trusty device.

Luigi’s Mansion will release on the 3DS later this year.