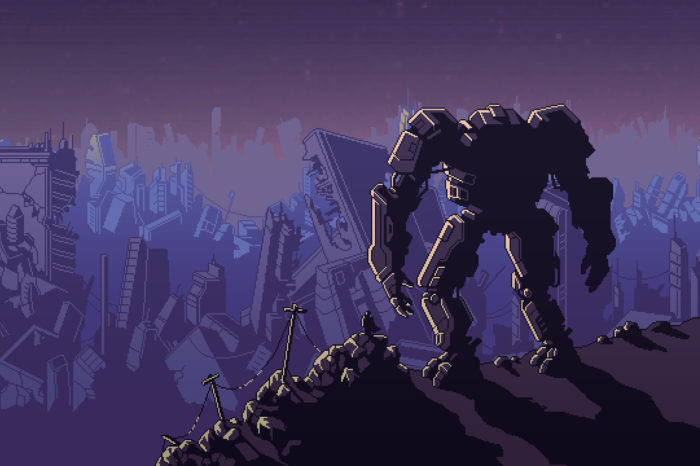 Into the Breach on PC

The first thing you need to understand about Into the Breach is that you are going to die. A lot. In fact, you’re probably going to die about 20 times before you even manage to clear the first island. It’s no problem, though; dying is simply a core part of the game.

Developed by Subset Games, the folks who brought us the phenomenal FTL: Faster Than Light, Into the Breach is a strategy game that lets you know exactly where you went right, and where you went wrong. There are no excuses here. The game makes you own every mistake, and it’s for that very reason that it’s so compelling and difficult to put down.

The story is a tad bare, but all you need to know is that you’re in charge of a time-hopping squad that’s tasked with saving the world from an evil alien race called the Vek. The problem is, the Vek are simply way too strong and their numbers are overwhelming. Even at the start of the game, you’re told that you’ve failed your mission, and it’s time to try again. Your pilots rip open a new hole in the fabric of space and time, they jump into the breach, and they’re transported to an alternate timeline where the world has yet to be consumed by the Vek. You have one more chance to set the record straight.

It’s a pretty brilliant concept that wraps itself around every single facet of this little strategy game. The roguelike elements come into play with each death, though Into the Breach is a little more forgiving than FTL in letting you choose one pilot to start your next game with. Each time you restart, the stages are a little different, and their completion objectives randomized. Just like what you’d imagine an alternate timeline would look like.

In battle, you get a good look at the grid and all its environmental obstacles before deploying your squad of three. And yes, you only ever get to control three units at any point in time. At the start of each turn, the various Vek units will clearly telegraph their attacks and what they’re about to do. Then, it’ll be your turn to make a move and do everything you can in your power to stop them from destroying the city and draining your power grid. The power grid is essentially a giant health bar that you have to be mindful of at all times. Once it drops to zero, it’s game over, and you’ll have to restart in another timeline. The grid power carries over between stages, so if you play too poorly at the beginning of the island, you’re most definitely going to have to pay for it later on.

On the other hand, your mechs’ HP get refreshed between each stage, which means that it’s almost always worth it to position them in the Vek’s line of fire if they’re about to attack a building. Then again, you will eventually start to recruit pilots to increase the capabilities of each mech, and as you level them up, you’ll gradually start to get attached to them. Into the Breach is brutal in that you’ll have to make a few tough decisions at some point – do you sacrifice one of your beloved pilots for the grid, or let the grid take the hit just so you can keep your squad intact?

There are various other elements to consider as well, such as enemies spawning in the next turn, and environmental effects that can decimate you in one hit. Just like enemy attacks, everything is telegraphed and indicated to you well beforehand. You’ll need to make good use of your turn to ensure that the Vek do as little damage as possible. In keeping with the game’s primary theme, it’s all about managing your time and using it to your advantage. The goal of each stage is not to destroy every single enemy unit and ‘win,’ per se. Every stage will list the number of turns you have to get through before victory is yours, meaning you simply have to keep the enemies at bay and survive as long as you can.

Combat itself feels like you’re manipulating time. There’s no RNG involved, a la XCOM or Fire Emblem. Everything is set and predetermined, and you can work your way around enemy moves by using an attack to knock one Vek into another’s line of fire so they start damaging themselves, or knock them out of position so they faceplant into a mountain instead. There’s a cerebral kind of satisfaction to be had from feeling like you’ve outsmarted the enemy AI each time to manipulate them into hurting themselves or causing them to fire a harmless shot into thin air.

But when you screw up, it’s utterly heartbreaking. Being able to see every enemy move is helpful and allows you to make better decisions, but if you’re too hasty, you might end up playing yourself into a corner and get checkmated by the enemy, so to speak. While there is satisfaction to be gained from gaming the AI itself, it’s also tough to see that the Vek have your buildings cornered and there’s absolutely nothing you can do in your next turn to halt the grid’s destruction. 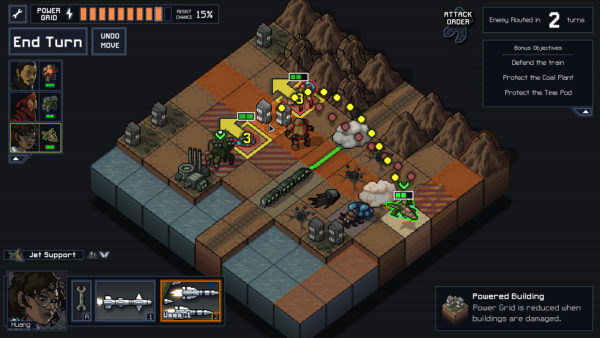 As you get better at Into the Breach, you’ll eventually start to clear the maps a little more efficiently. Completing optional objectives can give you various rewards, such as reputation points that can be spent on upgrades after clearing an island, bonus grid power, or reactor cores to improve your mech abilities. There are mini-boss fights waiting for you at the end of each island, and after you clear two of the four islands, you’re given the option to progress with the story and fight tougher bosses. Alternatively, you could try to clear the remaining two islands in the hopes of gaining more resources and be better prepared for the challenges that lie ahead. But know that if you mess up, as we silly humans are wont to do, you’ll have to start from scratch, though you will be able to start from any island you’d previously cleared before.

Get good enough at the game, and eventually you’ll also have enough coins to unlock new mech units. Into the Breach starts you off with the Rift Walker squad, but you can unlock other squads like the Zenith Guard to better suit your play style. Every mech unit and pilot comes with their own distinct sets of abilities for you to play around with, and the possibilities are endless for each map you attend. The variables are always different – your own squad, the enemy units, the map layout, the optional objectives. 10 hours in, and Into the Breach still feels fresh and exciting to play. The game isn’t quite as punishing as FTL, but it maintains a consistent level of challenge to make sure you’re never too comfortable with where you are. Every map feels like a desperate struggle to keep your grid power up, and you’ll pay dearly for every small mistake you make.

Into the Breach is brilliant in how it approaches the strategy game genre. By giving the player all the information they need, it’s easy to see where exactly you went wrong, and what you could’ve done to prevent it. Failure itself becomes the core gameplay loop. Every death is a valuable lesson learned, every pilot lost is a scarring reminder of what happens when you’re too impatient with your moves. Each time you fail to keep your grid power up, it’s back to the breach with you.