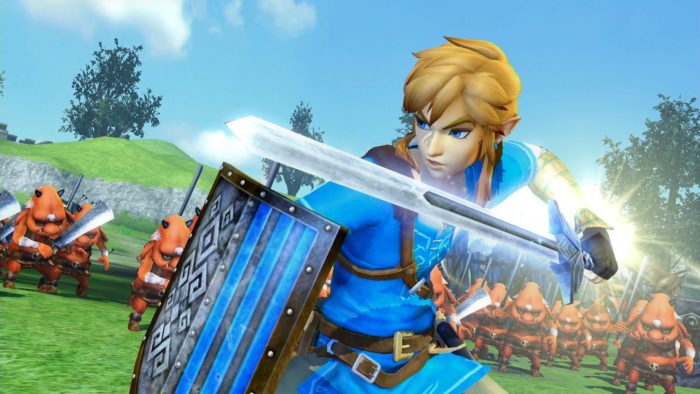 A new trailer for Hyrule Warriors: Definitive Edition was released today. The video, featured on Koei Tecmo’s Japanese YouTube channel, is the second official trailer so far. The game is planned for release on the Nintendo Switch.

Hyrule Warriors is a hack and slash video game that was first released in Japan on the WiiU back in August of 2014, with a worldwide release the following shortly after. The game is a spinoff of both Dynasty Warriors and The Legend of Zelda series. During game play, the player has to fight their way through swarms of enemies in order to complete various objectives. These objectives may include capturing points, defeating certain enemies, or protecting bomb deliveries. A 3DS port of the game was released back in 2016.

Hyrule Warriors: Definitive Edition will feature all 29 characters available in both the WiiU and 3DS versions of the game, as well as every map and mission. It will also include all previous paid downloadable content, and new outfits for both Link and Zelda based on their character designs in The Legend of Zelda: Breath of the Wild.

Along with footage of both playable characters and enemies, the new trailer shows some of the My Fairy gameplay section, where players can customize the appearance of their fairy. Available outfits include Aryll’s dress from Wind Waker, and Ghirahim’s outfit from Skyward Sword. A fairy can be used in battle for powerful attacks.

Hyrule Warriors: Definitive Edition will be available on the Nintendo Switch in Japan on March 22. The game is scheduled to be released in North America and Europe in Spring 2018.